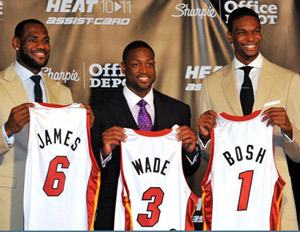 Overnight, LeBron James went from hero to villain. Although the Ohio native’s decision to leave the Cleveland Cavaliers to join Dwyane Wade and Chris Bosh in South Beach was met with much criticism by fans and sports critics, it was a calculated move to win a championship. James and the Miami Heat were able to make it to the NBA Finals in his first year with the team, but they still fell short of their goal.

In the wake of James’ failure to secure a championship, sports enthusiasts have begun to question the focus of today’s professional athlete. Gone are the days of teams slowly building up a competitive franchise. Now, in an effort to expedite the process, rosters are stacked with multiple All-Stars and the business of basketball seems to have trumped the sport itself.

BlackEnterprise.com sat down with former NBA player and current ESPN analyst Jalen Rose to discuss the League’s current “Big 3â€ syndrome and whether or not if LeBron James can repair his fractured image.

BlackEnterprise.com: Do you feel today’s professional athletes are more concerned with a championship as the defining moment of their career than generations past?

Jalen Rose: The NBA has become such a bottom line business where everybody is a critic…. Today, an NBA championship is how we judge our players and LeBron James is currently in the hot seat. If you don’t win a championship, people feel like your career is a failure. Players have decided to take that off the table and put themselves in a position to get a championship and silence the critics.

With Michael Jordon being regarded as arguably the best player to play the game because of his six championships, has that played a role in being the holy grail of achievement for players to achieve not just one championship but several?

Success is about realistic expectations in life. A lot of markets like the Yankees [in the MLB], and the Lakers and Celtics [in the NBA] have fans that expect them to win championships because their owners have created that expectation. But a lot of people and players feel like nobody will ever top Jordan’s six rings. He’s the only guy to have six championships and six NBA Finals MVPs in six tries. If the Heat win and Dwyane Wade gets MVP, that’s a knock against LeBron in his pursuit of Jordan. That’s how people analyze the game today and it’s unfortunate.

Do you believe that more teams will follow the Boston Celtics and Miami Heat formula and build their own “Big 3â€ as a way to get a ring?

This year’s Dallas Mavericks and the 2004 Detroit Pistons are the only two teams that have won without having multiple hall-of-famers playing at all-star levels. Larry Bird played with Robert Parrish and Kevin McHale. Magic Johnson never won a championship without Kareem Abdul Jabbar. Jordan didn’t win without Scottie Pippen. Shaq had Kobe and Dwyane Wade. If you want to be a dynasty, you need the parts to win multiple championships… Before Michael Jordan entered GOAT status, there used to be an argument about who was better out of him and Dominique Wilkins. Then the Bulls drafted Scottie Pippen, hired Phil Jackson and Michael Jordan’s career took off. He didn’t have to leave the Bulls, it was built in. On the other side, Shaq had to leave Orlando to get what he got in LA.

But does it soil a player’s legacy when he leaves his team to join someone else’s just to win a championship?

It doesn’t diminish it at all. LeBron could have stayed in Cleveland, put up big numbers, won another MVP and been a great Samaritan, but people would have said that he doesn’t have any championships. When you talk about the greatest players of all time, the only reason that Karl Malone and John Stockton’s name doesn’t come up is because they didn’t win a championship. Karl Malone has scored the second most points in NBA history but we’ll put Tim Duncan in front of him because he has four championships.