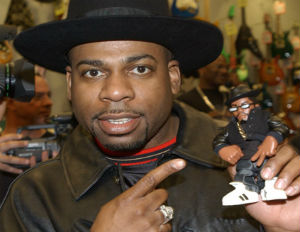 It’s been nearly a decade since the shooting death of Jam Master Jay, one-third of the pioneering hip-hop trio, Run DMC, and New York police officials told the Daily News that they still have no leads.

[Vincent] Santangelo, a 22-year vet, and his team spent years chasing scores of leads that sometimes brought him to cities across the country. No arrests have been made, but Santangelo believes that could change with the help of a good tipster – who can collect a $60,000 reward if there’s a conviction.

The authorities say they believe that Ronald Washington, who is serving a jail sentence for armed robbery, was either the shooter or the lookout. A relative also thinks that Washington was involved: Â “It’s frustrating,â€ he said. “But the fact that he’s in jail … I guess that’s some kind of closure.â€

Read more at the Daily News.