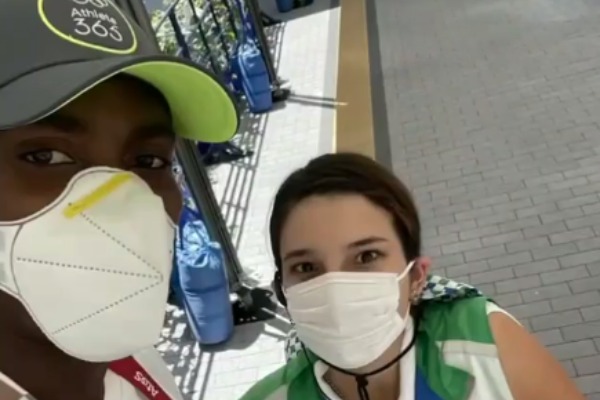 Jamaica’s Olympic gold-winning hurdler Hansle Parchment almost missed the race that turned him into an Olympic champion after he showed up at the wrong location.

Parchment recalled arriving at an aquatics arena instead of Tokyo’s Olympic Stadium on the day of his big race, CNN reported. If not for a volunteer who gave him money to catch a taxi, Parchment might not have made it to win a gold medal.

In a video he shared online last week, Parchment tracked down the nice lady who helped him out and repaid her for the cab fare.

“Reminder to be grateful always,” he captioned a three-minute video testimonial. “The Japanese people are the sweetest ever. Thank you my friend.”

In the video, Parchment recalls how nice the volunteer was when he realized he was lost. He noted how he had to beg the woman for help to get to the correct location.

“I saw this volunteer and I had to beg… and she actually gave me some money to take one of the taxis,” he recalled. “And that’s how I was able to get to the warm-up track at the stadium and with enough time to warm up to compete.”

“I’m going to find her this morning and show her this medal that she helped me get,” he added. When he did, he he gave her back the money as well as an Olympics t-shirt and a gold medal. They also posed together for a quick photo.

Jamaica’s Prime Minister, Andrew Holness, also praised the volunteer by reposting the video on Twitter and expressing gratitude for her kindness.

“Every Jamaican knows that gratitude is a must. @ParchmentHansle demonstrates that perfectly here,” he said.

Parchment’s win in the hurdles was one of four gold medals Jamaica earned at the Tokyo Olympics.