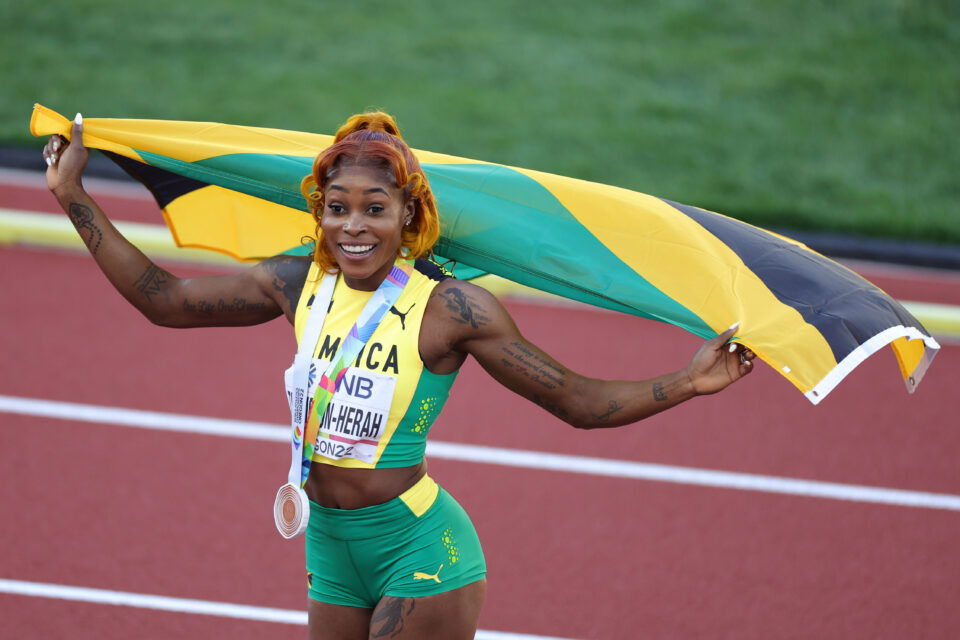 EUGENE, OREGON - JULY 17: Elaine Thompson-Herah of Team Jamaica celebrates after winning bronze in the in the Women's 100m Final on day three of the World Athletics Championships Oregon22 at Hayward Field on July 17, 2022 in Eugene, Oregon. (Photo by Carmen Mandato/Getty Images)

Andi sports management made the announcement Friday on Instagram, congratulating the young track prodigy. The news comes following Thompson-Herah dropping Nike, whom she has worked with throughout her career.

The caption read: “‘We are thrilled that Elaine has chosen to join the PUMA family,’ said PUMA CEO Bjørn Gulden. ‘With her speed, she embodies everything we stand for as a brand. Elaine ran the second-fastest time in women’s history last year and is only 0.05 seconds off a world record.’”

A five-time Olympic champion, 30-year-old Thompson-Herah shared her excitement for the partnership in a Thursday press release.

On Thursday, @FastElaine announced that she has signed with @PUMA.

The five-time Olympic champion joins an elite group of athletes, including fellow compatriot Usain Bolt, and has her sights set on breaking the 34-year 100-meter world record. pic.twitter.com/2Ev3OqWitP

“PUMA just felt like a right fit, a company that has been working with the World’s Fastest Man for decades,” Thompson said. “I’m excited to be a part of an elite group and I can’t wait to get started. I really want to break the 100-meter world record. The current one has been undefeated for 34 years. Now is the time. I think there’s still a lot I can unleash.”

The track star is the first woman ever to win the “sprint double” at the 2016 Rio Olympics and the 2020 Tokyo Olympics in not only the 100 meter but the 200 meter as well.

Born in Jamaica, Thompson-Herah attended the University of Technology, Jamaica where coach Stephen Francis noticed her abilities and worked with her to reach her fullest potential.

She made history in 2021 when she was confirmed the the fastest woman alive while competing at the Prefontaine Classic in Eugene, Oregon, coming in at 10.54 seconds.

“With God all things are possible,” wrote the star athlete on Twitter following the announcement.