Jason Derulo Takes to Vine to Promote New Single, â€œThe Other Side 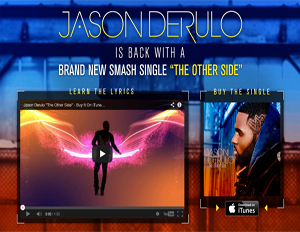 With social media, today’s artists must entertain, engage and excite their fan base 24/7. Since the rise (and fall…and subtle climb) of Myspace, there have been numerous social sites like Facebook, Twitter–now Twitter #music–and YouTube that have helped musicians, namely independent artists, build their brand awareness, drive sales and market their latest release. And there are more platforms popping up, but not all artists are daring or savvy enough to test them out.

Early adopter to video-sharing app Vine, Jason Derulo is using the 2-month old social networking site to promote his latest single “The Other Side.” Derulo’s fans, known as Derulers, are encouraged to create Vines using clips of the song and upload them using the hashtag #TheOtherSide, reports Mashable.

for all my #Derulers on that @vineapp, add #TheOtherSide to ur vines here, we broke out the song into 6 second pieces jasonderulo.com/vine

The selected Vines will be edited together in one video and then uploaded to Derulo’s YouTube channel.

“Vine allows me to connect with my fans in a very unique way. It enables me to get really creative in how I share a behind the scenes look into my life and my music,” Derulo told Mashable.

Available exclusively on iTunes, “The Other Sideâ€ is the latest single on Derulo’s upcoming album.