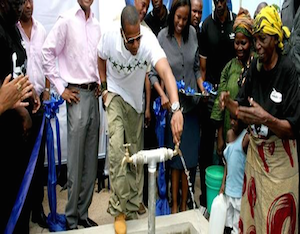 It seems that those phone calls and deals that “kingmaker” Jay Z has been taking are starting to pay off.

According to AllHipHop.com, the Roc Nation CEO has officially partnered with New York-based bottled water brand NY02. Billed as the “Official Water of Roc Nation,” the deal will ensure that thirsty Jay Z fans have some cold beverages to wet their whistle during events affiliated with Hov’s company.

Michael R. Yormark, the president and chief of branding and strategy for Roc Nation was quoted in a press release as calling the partnership “one of the most unique” in the entertainment industry. While the Brooklyn-born bad boy turned business mogul isn’t the first hip-hop superstar to link up with a water company, it does show that Jay Z is looking to increase his overall wealth after placing sixth in Forbes’ Most Powerful Celebrities list.

In addition to Roc Nation-affiliated tours, NY02 will also provide water for all marketing campaigns associated with Roc Nation artists, as well as being the exclusive branded water at Jay Z’s 40/40 Club. NY02 President Elias Slubski said in the same press release that their partnership has the potential to “thrust American premium bottled water onto a beverage marketing platform that is higher than New York’s Empire State Building.”

Time will tell if this shall come to pass. Be sure to keep your eyes out for the water when Jay Z andÂ BeyoncÃ©’s “On the Run” tour heads into your town.