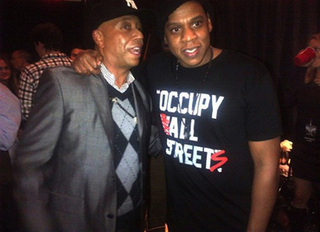 Although Jay-Z’s clothing line Rocawear made and sold t-shirts emblazoned with “Occupy Wall Street” and “Occupy All Streets,” the multi-millionaire businessman and hip hop artist now says he’s not completely in line with the Occupy Wall Street movement.

The Grio pointed out a quote from a New York Times interview, where Jay Z says “When you just say that ‘the 1 percent is that,’ that’s not true. Yeah, the 1 percent that’s robbing people, and deceiving people, these fixed mortgages and all these things, and then taking their home away from them, that’s criminal, that’s bad. Not being an entrepreneur. This is free enterprise. This is what America is built on.â€ The rapper said movements like Occupy Wall Street need to clarify their positions so that such distinctions can be made.

In other hip hop and politics news, President Obama responded to Nicki Minaj’s “endorsement” of Mitt Romney. The president said “I’m not sure that is actually what happened. I think she had a song on there, a little rap that said that. But, she likes to play different characters. So I don’t know what’s going on there.â€Â Good answer, especially considering the fact that in the same song, Nicki claims to be hanging out with a zombie in Malibu.

Do you think more music artists should discuss their political opinions or would you rather they just stick to music?