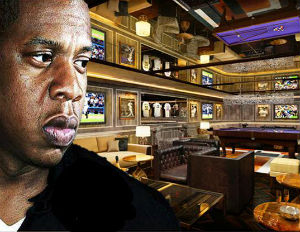 It seemed like just yesterday that Jay-Z, rapping on the Black Album’s Dirt Off Your Shoulder, casually mentioned he was hanging “at the 40/40 club, ESPN on the screen.â€ It was the same verse in which he mentioned something like “52 broads come out.â€

Lots has changed in ten years.

Honored guests, stars, VIP and members of Major League Baseball’s prestigious 40/40 club are expected to join Jay-Z to celebrate the tenth anniversary of the opening of the 40/40 club in New York City on Monday, June 17. The venue officially opened on June 18, 2003.

As for an appearance by a certain Grown Woman? The North American leg of her tour kicks off at the Staples Center in Los Angeles on June 28, some 11 days later. Said an insider who wouldn’t confirm her attendance: “Where else would she be?â€

Guests are receiving a baseball enclosed with the club’s logo which says “Jay-Z Invites You.â€

The anniversary event comes after the lounge reopened after closing last spring for renovations, said to cost somewhere in the neighborhood of $10 million.

It already promises to be a busy spring/summer for the venue. Roc Nation Sports signee Robinson Cano is throwing his Superhero Fundraiser and Domino Tournament June 24th to benefit his RC24 Foundation.

Plans are already under way for a star-studded event surrounding the MLB’s All-Star Game, which takes place at CitiField on July 16. It’s certainly fitting — the 40/40 club takes its name from the exclusive list of players who stole 40 bases and hit 40 home runs in a single season.