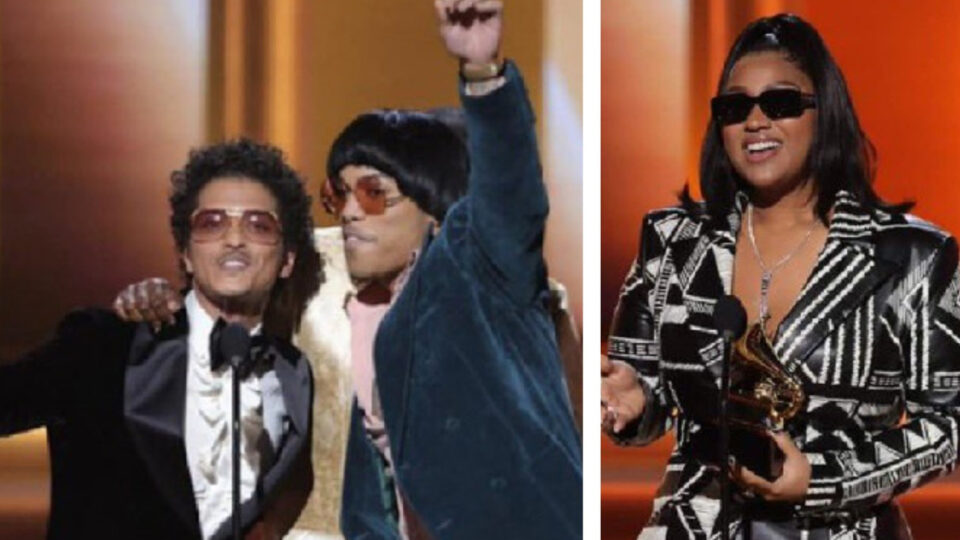 In a rare instance for the GRAMMY’s presentation on Sunday, two artists tied to win a Grammy.

At this year’s GRAMMYs, recording artists Silk Sonic (Anderson. Paak and Bruno Mars) and Jazmine Sullivan tied for Best R&B Performance at the 2022 GRAMMYs. The winning songs for the artist, both ballads, were Silk Sonic’s Leave The Door Open and Sullivan’s Pick Up Your Feelings.

Sullivan is a first-time winner at The GRAMMYS as she also took another one home for best R&B album. The song, Pick Up Your Feelings is on the album she won the second GRAMMY for, Heaux Tales.

According to USA Today, Sullivan couldn’t contain her excitement as she stated, “I’ve been wanting to win a Grammy since I was a kid. After losing so many times, I kind of gave up, like maybe it’s not for me, and I’ll just make my music. It’s surreal to hold these babies right now.”

Sullivan has been nominated for a GRAMMY award 15 times, finally striking with not one but two this year.

Meanwhile, this year, Silk Sonic was nominated in four categories and made a complete sweep.

As he is celebrating his second major GRAMMY, he took the sweep in stride. “We’re really trying our hardest to remain humble at this point,” .Paak says. “But in the industry, we call that a clean sweep.”

The two solo acts who came together for this laidback, retro-sounding group also snagged the GRAMMYS for Record and Song of the year while taking the prize for R&B song and R&B performance for the first single they dropped as a group, Leave the Door Open.