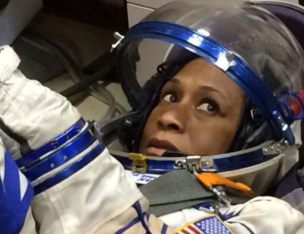 Astronaut Jeanette J. Epps is on a mission to space that will make her the first African American woman to work as a crew member on the International Space Station. She’s also the 13th woman to call ISS home since the space station was founded in 1998. NASA recently announced that Epps will serve as a flight engineer in May 2018 on Expedition 56 with veteran astronaut Andrew Feustel, and will stay on board for Expedition 57, spending six months there, according to a press release. NASA has sent 14 black astronauts, three of them women, traveling into space in its history. Although many of those astronauts flew missions to the International Space Station, none of them stayed aboard.

Feustel and Epps will join a long and distinguished line of astronauts who have crewed the International Space Station since November 2000. “Each space station crew brings something different to the table, and Drew and Jeanette both have a lot to offer,â€ said Chris Cassidy, chief of the Astronaut Office at NASA’s Johnson Space Center in Houston, in a press statement. “The space station will benefit from having them on board.â€

Epps has been working toward traveling to space since she became one of just nine people chosen for NASA’s 20th astronaut class from a pool of 3,500 applicants in 2009. The former NASA Graduate Student Researchers Project fellow also holds a Ph.D. in aerospace engineering from the University of Maryland. After completing graduate school, she went on to work in a research laboratory for more than two years, co-authoring several patents, before being recruited by the U.S. Central Intelligence Agency, according to her bio. She spent seven years as a CIA technical intelligence officer before being selected as a member of the 2009 astronaut class. Epps served as an aquanaut aboard the Aquarius underwater laboratory during the NEEMO 18 undersea exploration mission. It began on July 21, 2014, and lasted nine days.

Hidden Figures captured the No. 2 spot during its opening weekend, taking in $24.7 million at the box office, reports Box Office Mojo.