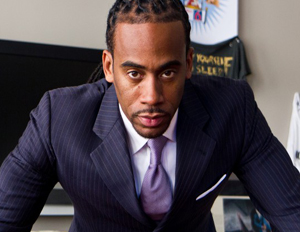 After sacrificing and working vigorously as a college student, one would expect that having a stable career isn’t too much to ask for. However, due to the volatile job market and economy, career predictability and stability is a very lofty goal for some young professionals. A well-known and respected professional who’s not a stranger to the highs and lows of career evolution is Jeff Johnson (@JeffsNation).

In his book, Everything I’m Not Made Me Everything I Am: Discovering Your Personal Best, Johnson writes: “The thing about change is that it’s inevitable—it’s going to come, whether we like it or not. We can either get out in front of it and make the change, or we can stay behind it—hoping naively to avoid it—and let the change happen to us instead of for us.â€

Johnson serves as chief of strategy at illume Communications, a communications firm that specializes in research-based, creative messaging strategies. He is also an acclaimed journalist and weekly commentator on the popular Tom Joyner Morning Show. He’s appeared as star of BET’s “The Truth with Jeff Johnson” and a guest on MSNBC’s Dayside and Hardball with Chris Matthews, CNN’s Larry King Live, Fox News Channel, Huffington Post, The Root, and Ebony.com—to name a few.

In a recent interview, Johnson took a break from his media-based and motivational speaking platform to offer some of his most personal insights on challenges in one’s professional journey. Below, he shares three things you must do to overcome fear and make the best of career transitions:

When Johnson addresses audiences of young professionals most often his main piece of motivational advice is based on strategy. During his first big career transition, Johnson says he was moved by his passion, so he rushed into the transition without laying a strategic foundation for his next move.

Consequently, Johnson encourages professionals to equip themselves with a journey map to facilitate their strategy development process. “A journey map is about knowing more than where your first stop is going to be,” he says. “The whole point of a map is to plot out where you are and how you’re going to get where you’re going.â€

Included in your personal journey map should be your identified safety net: What will be your last resort strategy if your primary options don’t come to fruition? It’s important to note that if your safety net strategy involves other people or resources that you currently do not have, make sure you begin lining these necessities up appropriately so that your net will function as planned if you have to rely on it.

Make career moves that are aligned with your vision and leverage your assets.

“Your next career move should not be merely for the sake of shifting pay checks or elevating titles,” Johnson says. “You must determine if the transition is going to help you grow professionally toward a bigger goal. Sometimes you will have to make a horizontal or lateral move—but as long as it will help you achieve your overall vision, you should go for it.â€