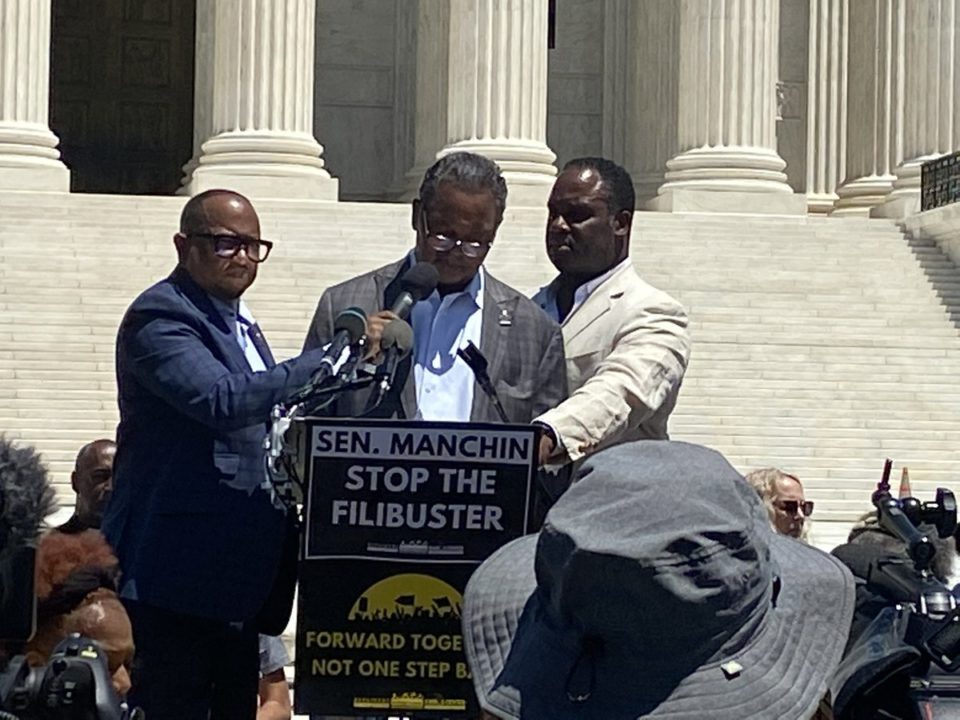 Capitol police didn’t do much arresting during the January 6 insurrection. But they had time to arrest 79-year-old Rev. Jesse Jackson for protesting a Republican-led filibuster.

The civil rights leader and social justice activist Rev. William Barber II were both arrested on Wednesday during a Capitol Hill protest in response to Senate Republicans blocking legislation to counteract the restrictive voting laws recently enacted, News One reported.

Jackson and Barber were participating in the “Moral March on Manchin and McConnell,” a rally put together by the Poor People’s Campaign to call out West Virginia Sen. Joe Manchin and other Republican lawmakers to get the “For The People” voting rights bill passed, CNN reported.

They were among the 21 people arrested on Wednesday for crowding and obstructing.

Went to visit a friend at the Capitol & walk into the #PoorPeoplesCampaign protest over the #FILIBUSTER. Next thing I know, Rev. Jesse Jackson & Pastor Dr. William Barber II are getting arrested! pic.twitter.com/x6YRw2IUCI

Barber stood in the middle of Constitution Avenue as swarms of demonstrators marched behind him with a banner that read “Manchin, stop hurting West Virginia: Stop the filibuster.” The pastor said he didn’t mind getting arrested to make sure his message was heard, Religion News reported.

“It took this to win it, it’s going to take this to keep it,” Barber said.

Jackson shared the same rhetoric ahead of his arrest.

“We come not as an insurrection group, but as a resurrection group,” Jackson said. “Today we must fill up the jails. If you call yourself a child of God, you oughta act like it sometimes.”

The protests were in response to the Senate’s recent failure to sign voting rights legislation dubbed the “For the People Ac”t that would undo the recent restrictions a number of Republican-led states put into place, including limiting mail-in voting and poll hours.