Jimmy Carter Announces He Has Cancer 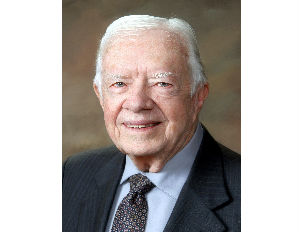 According to reports, President Jimmy Carter announced he has cancer.

“Recent liver surgery revealed that I have cancer that now is in other parts of my body,” he told reporters. “I will be rearranging my schedule as necessary so I can undergo treatment by physicians at Emory Healthcare. A more complete public statement will be made when facts are known, possibly next week,” Carter said in a statement.”

Although it’s not yet clear what kind of cancer he has, his father and three siblings allÂ died ofÂ pancreatic cancer, a type of cancer that kills more African Americans than people of other races. Family history is also a high-risk factor for this type of illness.

“Our thoughts and prayers are with [wife] Rosalynn and the entire Carter family as they face this challenge with the same grace and determination that they have shown so many times before,” Obama said in a statement released by the White House. “Jimmy, you’re as resilient as they come, and along with the rest of America, we are rooting for you.”

The 39th president of the United States, Carter is known for his work with groups such as Habitat for Humanity, his early, oftentimes controversial, support of school reforms and anti-discrimination efforts, and he won the Nobel Peace Prize in 2002 and founded the nonprofit Carter Center in Â Atlanta, Georgia.