Jimmy Graham: A Story of Survival & Beating the Odds 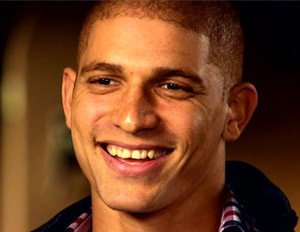 Most of the public is only recently becoming aware of the story of Jimmy Graham. I find this very unfortunate, but true. Graham is a tight end for the New Orleans Saints football team. As of this writing, he is the leading tight end in the NFL in terms of receptions and touchdowns. But most importantly, he is proving to be a true “ballerâ€ in the game of life!

Born and raised in Greensboro, North Carolina, this 24-year-old has scored big both on and off the field. Just imagine, at the age of 11, being put in a parent’s car and then being dropped off at an orphanage.

Well, unfortunately for Graham, he doesn’t have to imagine–this was his life. Graham recounts the story of him being in the backseat of a van with his housemates from the orphanage and being beaten until his eyes were swollen shut. He called his mother and asked her to pick him up and she simply hung up the phone. Ouch!

After bouncing around from house to house, he was eventually taken into the home of his future adoptive mother, Becky Vinson during his high school years.

According to Graham, he and his biological mother are “slowly rebuilding a relationship, but it’s moving very slowly… I told her that I forgive her, but I won’t forget.â€

Graham is a better man than me. I’m very impressed with the way he presents himself on TV. But, his attitude towards his mother goes to the type of character he has. Isn’t it a shame that more people are aware of BeyoncÃ©’s pregnancy than Graham’s story?

Graham, who now stands 6’6â€ and 260 pounds, earned a basketball scholarship to attend the University of Miami (commonly referred to as “The Uâ€). He played football in his last year of school (along with four years of basketball) and graduated in 2009 with a double major in marketing and management. He then enrolled in graduate school so he could play one year of football. During the 2010 NFL draft, Graham was picked by the New Orleans Saints in the third round (95th overall pick) and signed to a four year, $ 2.5 million contract.

There’s a lot more to this story, but because of space constraints, there is not enough room to write about everything; but just Google his name and you can read all the details of this fascinating person (or watch ESPN’s profile below). So, the next time you hear or read a negative story about a professional athlete, just think about Michael Vick or Jimmy Graham. Most professional athletes are good, upstanding citizens. Don’t allow the media to cloud your views because of a few bad apples.

This story is not about sports, it’s about life. We all have faced or will face our own traumatic situation(s) in our life. How we respond will determine the quality of our life.
There are not many people who I really want to meet in life, but Jimmy Graham is definitely one. I want to know how he went from failing grades, to a basketball scholarship to a very prominent university (with a double major in marketing and management), finished in four years, then enrolled in graduate school so he could play one year of football, and then to excel on the professional level in the sport. All this while overcoming the trauma of his youth.

Jimmy Graham, your life is truly a touchdown. Whether you know it or not, you have already won the Super Bowl of life!