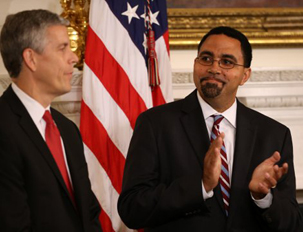 BlackEnterprise.com spoke with King about his priorities over the next 13 months, why he’s optimistic about the Every Student Succeeds Act, and how New York City public schoolteachers saved his life.

[RELATED: Education Secretary Arne Duncan to Step Down in December]

King says ESSA builds on the legacy of the Elementary and Secondary Education Act, signed into law by President Lyndon Johnson. “It requires that states set high standards. It ensures that parents and teachers have information each year on their students’ progress, and it requires that schools that are in the bottom 5%, that have significant gaps or chronically low graduation rates, are invested in.â€

The law also commits to preschool – “We’re thinking of our system as a P—12 systemâ€ –Â and to accumulating evidence about what works and then scaling those practices. Promise Neighborhoods, which provide extensive nonacademic wraparound services in the lowest performing schools, are also supported in the law.

Although the law has beenÂ widelyÂ seen as shrinking the federal role and perhaps its authority, King says that’s not the case. “States can still be held accountable because ESSA provides the authority necessary for the department to set guardrails around the state flexibility, so through the regulations and oversight and monitoring we will ensure that states transparently report information.â€

For the Obama administration, King says, the priority over the past seven years has been graduating kids college and career ready. Indeed, there have been notable successes, such as the record high school graduation rate of 82% and the narrowing of gaps between groups of students, such as African Americans, English language learners, and low income students. It’s unclear, though, if the graduates are ready for post-secondary education or the workplace.

“We do need to remain vigilant that states and districts work to fulfill the promise of the law,â€ King says. “We still have the authority to intervene, to do intensive monitoring, to restrict or withhold funds.â€ But King says he’s optimistic, and noted that an organization of state education leaders recently chose equity as its conference theme.

King’s poignant personal history has perhaps uniquely qualified him for this new role. The son of educators who met in graduate school – his father, the first black school principal in Brooklyn, was his mother’s instructor – he lost both parents to illness by the time he was 12.

“Through all of that, school and teachers made the difference for me,â€ King says. He takes his responsibility in his new role very seriously, because he understands the power that school and teachers can have in the life of a child who’s confronting loss and turmoil at home. “School can be the thing that provides hope and stability.â€

To help make the difference in the lives of underserved children, King says his priorities for the next 13 months are as follows:

As Acting Secretary, King avoids the Congressional approval process but is expected to serve until the end of President Obama’s term. Depending on who wins the presidential election, he may be asked to stay on.