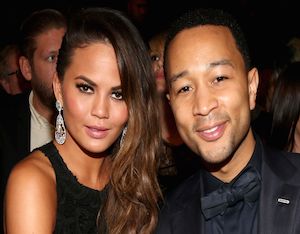 Grammy award winning singer-songwriter John Legend is showing that his actions can impact more than his words ever will.

Alongside his wife, model Chrissy Teigen, the two bankrolled a fleet of food trucks to feed hungry New York City protesters who are out fighting against police brutality. In the wake of such blistering news involving Staten Island’s Eric Garner and Ferguson, Missouri’s Michael Brown, the husband-and-wife tandem are putting their money right where the protester’s mouths are.

Breaking at Vanity Fair, the G.O.O.D. Music crooner never implicitly lent his support behind the moment. Instead, Twitter, which included his wife, tweeted the news to let the protesters know when, where, and for how long they could get a free meal while fighting the good fight. “3-6pm. FREE food trucks by Trader Joe’s Union Square. @OpHelpOrHush #FergusontoNYC #NYC2Ferguson,” Tiegen retweeted to her nearly 560,000 followers.

With millions of people continuing to line the streets in cities across the country, here, in New York, the police department is doubling down to prepare for increased activity. This comes after NYPD Commissioner William Bratton announced that there would be an internal investigation into the death of Eric Garner, which could take up to four months.

Legend, 35, was recently nominated for several Grammy awards, and is the author behind “Glory,” a moving (and timely) track from Ava DuVernay’s upcoming film, Selma. In it, the Ohio native sings, “That’s why Rosa sat on the bus/That’s why we walk through Ferguson with our hands up.” Very poignant indeed.

You can hear the full song by pressing play below: