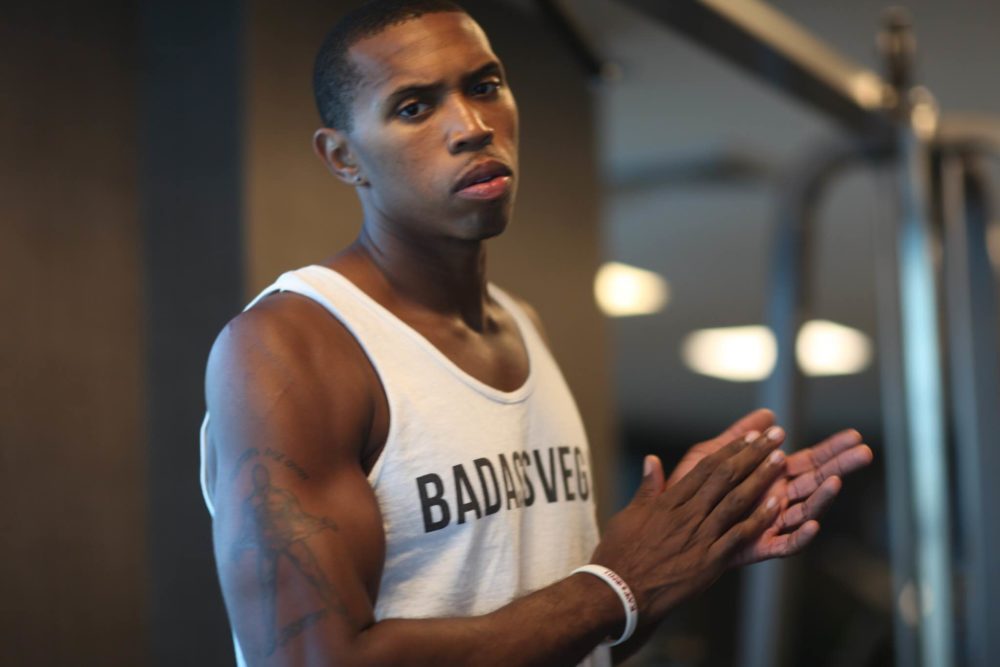 “Sexy” and “cool” are not the first words that come to mind when many people think of veganism. Instead, the plant-based lifestyle is commonly associated with the thought of unappetizing, tasteless food patronized by privileged white people. However, renowned fitness expert and entrepreneur John Lewis is on a mission to debunk that misnomer and expose the benefits of being vegan to people of color.

At 6’6″, 220 pounds, with killer six-pack abs, Lewis is a walking testimony that veganism not only makes you feel good, but it can also help you get in shape and look your best. Back in 2010, the 39-year-old Missouri native started a health and nutrition company called Bad Ass Vegan, which educates folks on plant-based nutrition. The company, along with Lewis’ personal brand, has helped diversify the image of veganism, and reshape its appeal.

In addition to becoming a recognized advocate of veganism, Lewis is also dedicated to combatting obesity in African Americans, who happen to be the leading consumers of meat in the U.S. According to The State of Obesity, nearly half of all black Americans – 47.8% to be exact – are obese, compared to 32.6% of whites. Meanwhile, 56.6% of black women are obese. As a result, African Americans are almost twice as likely to be diagnosed with diabetes and die from heart disease and stroke.

To address this issue, in 2013, Lewis and two of his Kappa Alpha Psi fraternity brothers, launched VeganSmart, a foundation that tackles obesity through education and physical activity along with vegan shakes, recipes, and an interval cleanse program.Â “Urban America needs us. I love my white friends, [but] they don’t need us right now,” says the fitness trainer.

This year, Lewis decided to reach out to black women by becoming a vendor at Circle of Sisters, the largest expo for women of color in New York City. Surprisingly, Lewis says his nutritional VeganSmart shakes received “amazing reception at the annual expo. People were open-minded about trying samples of the different shake flavors, which include chocolate, vanilla, chai, wild berry, cookies and cream, and chocolate raspberry. “I think we’ve actually almost sold out of two flavors already, on the first day. It’s been very receptive,” he says.

His goal at the two-day affair was “to show that healthy does not mean weakness” and change cultural norms that encourage unhealthy eating. Many communities of color associate being overweight with being prosperous, while black women are praised for being “thick,” he says. But, “You can be thick and healthy.”

The nutrition coach also says he was happy to receive so many questions from people curious about veganism at Circle of Sisters. “They’ve been asking us questions [about] where they can go [or] how can they change it up. People are tired doing the same thing and not getting good results. So, they’re looking for a change, and the vegan diet helps that out. It helps people change their lives completely.”

While creating his business, Lewis says he was fully aware that many people, particularly people of color, would be turned-off by veganism based on the assumption that the food is flavorless. This is why Lewis made taste a top priority when creating VeganSmart. As a result, you would never know that the delicious, vegan shakes are filled with amino acids, nine fruits and vegetables, 22 vitamins and minerals, fiber, omega, probiotics, and digestive enzymes.

“As black people, we’re about taste. So, we started with taste first, then we worked on the nutrients,” Lewis says.

He then went on to stress the necessity of promoting healthy living in black and brown communities. “Even if they don’t buy our product, I want them to see that they are in control of their own destiny and their health,” he says.

“Vegans aren’t filling up the hospitals. Nobody is coming in with a heart attack, because they had too much salad that day or too much fruit.”