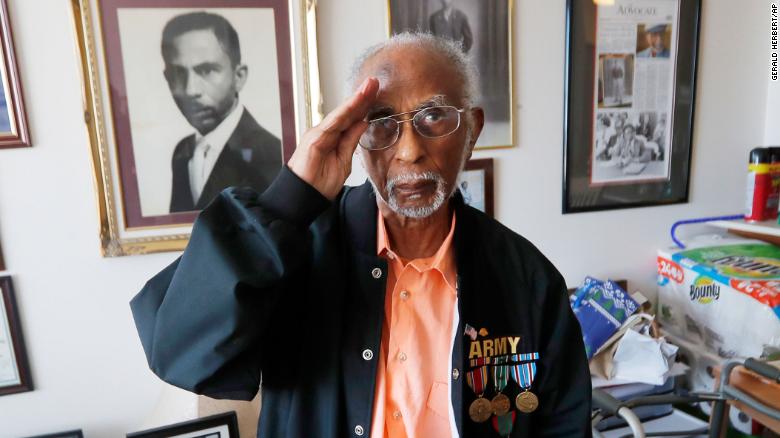 Johnnie Jones Sr., a Louisiana civil rights attorney and decorated World War II veteran wounded during the D-Day invasion of Normandy has reportedly died. He was 102.

The honorable war veteran was born Nov. 30, 1919, in Laurel Hill, Louisiana. He was raised on the Rosemound Plantation by his parents, who farmed 73 acres of land. A Southern University graduate, Jones tested as the first Black soldier for the Warrant Officer position in the military at 22 years old. He was drafted into the Army in 1942. A year later, he was promoted to the rank of warrant officer, junior grade.

From German snipers to bomb attacks, Jones fought hard overseas for freedom. He was hit with shrapnel later on in the war but was not awarded a Purple Heart at the time.

Upon returning from Mississippi to Louisiana, he faced racism amid the Jim Crow South era. In 1946, while driving to New Orleans, he was pulled over by a white police officer.

“He knocked me down and started kicking me,” he said. “Things weren’t right. ‘Separate but equal’ was unconstitutional, and I wanted to fight it and make it better.”

A civil rights icon, Jones was very involved with the NAACP. When he earned his law degree in 1943, Rev. T.J. Jemison recruited Jones to help organize the United Defense League’s eight-day bus boycott in Baton Rouge.

He also defended students in drugstore sit-ins and other civil rights protesters who were arrested. Throughout it all, his car was bombed twice.

It took decades for Jones’ sacrifice and courage during World War II to be recognized. In 2020, the French government presented Jones with the Legion of Honor award for his World War II service.

Last year, at age 101, Jones finally received a Purple Heart, which is awarded to U.S. service members killed or wounded in action.

“We are saddened by the news of the passing,” the Louisiana Department of Veteran Affairs (LDVA) stated, as per CNN. “It was our distinct honor to care for Mr. Jones at our Louisiana Veterans Home, where he lived since this past December.”

They continued: “We will always be grateful to have played a part in awarding him the Purple Heart he deserved for his injury in combat.”