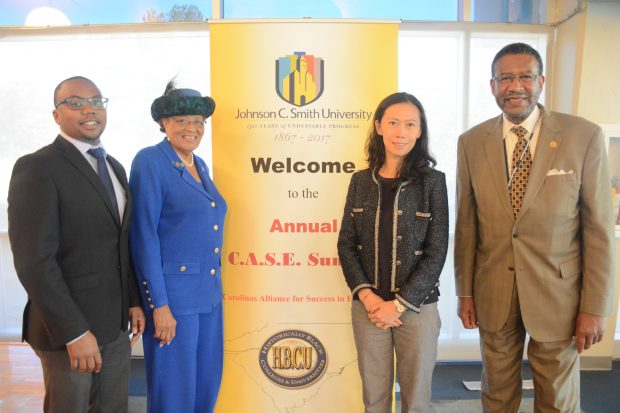 Earlier this month Johnson C. Smith University hosted the annual HBCU Case Summit, the purpose of which is to strengthen ties between historically black colleges in the Carolinas:

And in South Carolina:

According to the report, “the nation’s HBCUs generate $14.8 billion in economic impact annually; that’s equivalent to a ranking in the top 200 on the Fortune 500 list of America’s largest corporations.” As far as employment, HBCUs generate more than 134,000 jobs. The report states, “Looked at a different way, each $1 million initially spent by an HBCU and its students creates 13 jobs.”

In a spirited panel discussion, “HBCU Innovation, Entrepreneurship, and Economic Development,” panelists Mark Little, executive director of Kenan Institute for Private Enterprise at UNC; Chad Womack, national director of Innovation, Commercialization, & Entrepreneurship at UNCF; Doug Speight, CEO of American Underground; and Terik Tidwell, director of STEM Innovation at JCSU, discussed how HBCUs can leverage their economic impact to tell their story; and how the next generation of our best entrepreneurs is at HBCUs, and how it needs to be cultivated.

JCSU also recently announced that it has received $1.8 million in grants to develop a K-16 STEM initiative that will prepare middle and high school students to succeed in STEM.

The Kenan Charitable Trust has granted $1,100,000, and the Department of Education, $738,000 to develop JCSU’s Access to Innovation Initiative. The initiative will be piloted in two local schools and will involve after-school enrichment classes, dual enrollment, mentorship, and summer sessions at the renowned HBCU.

“This initiative is about co-creation, impact, and scalability,” Tidwell is quoted as saying in a statement. “It will increase the density of access and the propensity of innovation for students in and around the university.”

For more about innovation at JCSU, visit its website.