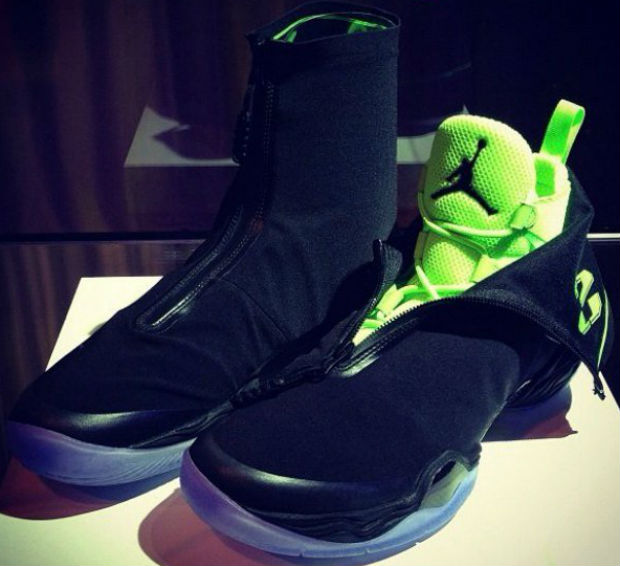 The Jordan Brand on Monday rolled out an A-list of names including Spike Lee and perennial NBA All-Stars Russell Westbrook and Carmelo Anthony at its unveiling of the new Air Jordan XX8 shoe, an impossibly lightweight, military-inspired hightop which uses “Flight-Plate technology” brand designers say have never been used in a basketball shoe.

With a decidedly New York tilt to the event held just blocks from Madison Square Garden, Lee helped preside over two pieces of news: Anthony and Jordan Brand Larry Miller announced they will make a “significant” donation to the Red Hook Initiative to aid victims of Hurricane Sandy displaced and affected by the storm; (Anthony was born in Red Hook) for his part, Westbrook announced he would be the first to wear the shoe on Dec. 4 in Brooklyn against the Nets.

At one point, Lee, a die-hard Knicks fan, reminded Anthony that it’s been too long since the Knicks won a championship.

The shoe was designed by a team led by longtime Jordan visionary Tinker Hatfield and Josh Heard. “I don’t think of these as basketball shoes,” Hatfield said. “I think of them as objects of art and design that happen to be used for basketball.”

The flashy and fashionable Westbrook expressed excitement about the comfort and the chance to wear the show, adding that his teammates hadn’t gotten a chance to be jealous — they hadn’t seen them yet.

Miller said he couldn’t be more pleased to have landed the OKC guard.

“When we look to add athletes to the brand we look at guys who do great things on the court, but also at who they are as individuals and what they do off the court,” Miller told BlackEnterprise.com. “We just thought Russell was a great fit, from who he is as a person, his fashion sense, just the way he handles himself. We thought that before we met with him and it was just an instant connection with the folks who work with the brand and him and his family. It just felt like he was the right guy for us.”

Miller added that Westbrook’s youth — he turned 24 on Nov. 12 — was a strong factor in the brand’s signing, but that the appeal didn’t stop there.

“It’s important that we maintain a fresh young perspective when it comes to product and thing we’re designing with the brand,” Miller said. “Having someone like him as a fresh set of eyes and ears, and having that feedback definitely made a difference for us.”

Miller said that Dwyane Wade’s departure for the Chinese shoe company La-Ning, in which he has an ownership stake, had little influence on the signing of Westbrook, or Clippers forward Blake Griffin.

“From our perspective, we wish him the best,” Miller said of Wade. “He helped the brand while he was here, but having the opportunity to add Russell, Blake Griffin and Michael Kidd-Gilchrist, I think we’re in a position where we feel like we’re going to be okay.”

Rumors were abuzz that the shoe would retail for up to $250, but several Jordan officials present wouldn’t confirm. Miller said he was aware of many of the social implications connected to almost all of the shoes Jordan releases, adding that he’s begun to work with his team to determine ways to channel the passion young people in urban centers have to the brand and its product. Whenever the shoe is released, Jordan can hardly ignore ramped up pressure on retail stores carrying the shoe to assure a safe environment for consumers.

“We are trying to figure out how we used their emotional connection to the brand to motivate them in the right direction,” Miller told BlackEnterprise.com. “We’re spending a lot of time talking about that. It’s certainly something that we’re conscious of and we’re working on how to do a better job at that.