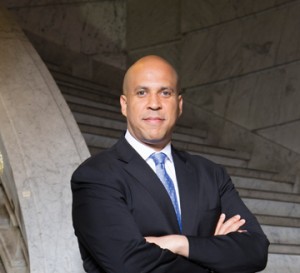 It was within a week of being sworn into the U.S. Senate that former Newark Mayor Cory Booker was called upon to vote for a bill in Congress that has been heatedly debated since 1994, the Employment Non-Discrimination Act. The legislation, ENDA, would make it illegal to discriminate against anyone on the basis of sexual orientation or gender identity. It is illegal to discriminate on the basis of race, sex, nationality, religion, age, or disability.

It was the first big issue for the Democratic senator representing the state of New Jersey after winning a special election in October. Just before the vote, he took to Twitter @CoryBooker. “Absolutely, unequivocally, proudly, with gusto & enthusiasm. I hope to make it my first “co-sponsorâ€ RT @frendazoned Are u supporting ENDA?â€ After the Senate vote on Nov. 7, he sent a celebratory tweet from the Senate floor. “ENDA passes!!!â€

Booker’s Twitter habits have contributed to his high profile and popularity. He once responded to a tweet that resulted in him rescuing a dog from the cold. The 44-year-old mayor went to Washington with the backing of 1.4 million Twitter followers. In 2010, research engine Samepoint ranked him the second most social mayor next to San Francisco’s Gavin Newsom.

Booker has gained 30 times as many constituents as a senator as he had as mayor, and about 36% more Twitter replies, according to analysis from TIME using Twitter API. He now has to measure up against social media influencers such as Texas Sen. Ted Cruz, who has more than 500,000 Facebook likes, and Arizona Sen. John McCain, who boasts 1.8 million Twitter followers.

RELATED: Cory Booker Talks About Being the Social Mayor

As a public servant, “social media is a powerful tool. I can stay connected to my constituents. We can organize ourselves around real issues and get things done,â€ says Booker, a tech investor who co-founded the Internet startup Waywire in 2012 with financing from Silicon Valley moguls and whose involvement generated controversy (he stepped down from the board of Waywire in September).

New Jersey’s first African American senator is only the ninth African American to head to the upper House of the United States Congress in 224 years. Booker’s hands-on approach to helping local citizens and working with grassroots organizations earned him a reputation as “the People’s Mayor.â€ Now he wants that same recognition as senator.

Sen. Booker wants to leverage private—public partnerships for New Jersey as he did in Newark, which includes the infamous $100 million donation from Facebook founder Mark Zuckerberg to the city’s public schools. He also seeks to strengthen small and minority businesses similar to his economic development efforts in Newark.

But Congress will pose different challenges for the junior senator. As mayor of Newark, he was CEO of the city. Now he is one of 535 members of the 113th Congress which has been locked in partisan warfare and political gridlock, making it the least productive and most polarized legislative branch in American history.

Booker, who successfully worked across party lines in Newark including a solid relationship with New Jersey’s Republican Gov. Chris Christie, is up for it. An All-American football player, Booker points to how the sport breaks down illusions of difference. “You have to learn to get along with people whom you may not like off the field to win the game,â€ he says. It’s that cooperative spirit he intends to bring to the Caucus.