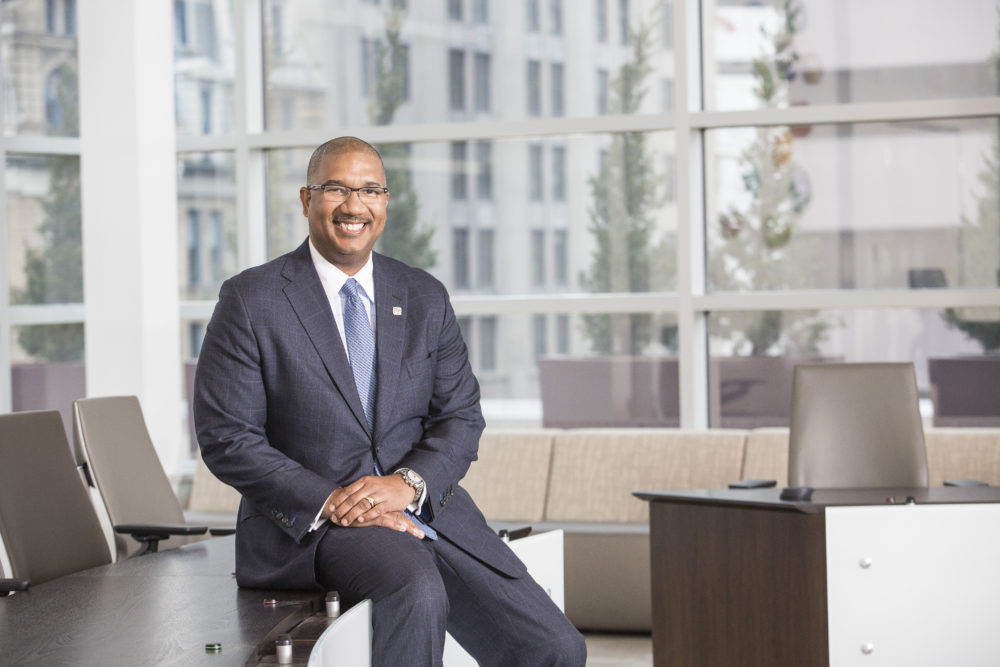 As Executive Vice President and Head of Business Banking for Fifth Third Bank, Kala Gibson focuses on helping small businesses gain the resources necessary for them to continue to drive employment, innovation, and impact. In doing so, the financial services veteran has served as a catalytic force for what he describes as “urban entrepreneurship.”

Although he may serve a small business clientele, Gibson manages a massive portfolio. He oversees strategy, sales, product development, credit fulfillment, and operations for one of the Cincinnati-based institution’s largest divisions. As such, Gibson guides his team to handle the needs of companies with annual revenues up to $20 million—a cluster he says that ranges from “mom and pops up to the fast-growing tech companies”—across more than 1,100 banking centers in 10 states.

One of the nation’s preeminent leaders in business banking, Gibson is best suited to lead Fifth Third’s charge in this area. The Detroit native is a graduate of Grand Valley State University and Michigan State University’s Eli Broad College of Business, gaining intimate knowledge of the needs of entrepreneurs with his 13-year stint with Comerica and more than six years with Fifth Third.

A PASSION FOR BANKING AND BUILDING COMMUNITIES

He holds a boundless passion for banking, dating back to his love of Monopoly at the age of 7. He was imbued with the spirit of service, however, when he noticed as a youngster that “banks and business left my community and then we started to see the decline. I saw that and said, ‘Hey, I want to fix that.’ So as a child, I actually [declared] ‘This is my purpose in life.’ ”

Today, the expression of that purpose can be found in his role in the implementation of Fifth Third’s Community Commitment, which has pledged $11.1 billion to small business lending through 2020, and its $5 million contribution to the Community Reinvestment Fund (CRF) to expand access to capital, financial management, lending tools, and continuing education to low- and moderate-income housing. Moreover, last year, he was appointed to the board of directors of the National Minority Supplier Development Council, the leading supplier diversity and inclusion organization that matches more than 12,000 certified minority-owned businesses to its network of 1,750-plus corporate members.

“I think the biggest thing that we do that is unique to Fifth Third is that we collaborate with our community and economic development policy team, and not just lend money but also actually try to build this small business ecosystem, which we believe is going to be important for minority-owned businesses and specifically African American-owned businesses,” says Gibson.

BLACK ENTERPRISE sat down with Gibson on how he uses his corporate leadership to advance African American businesses and communities of color.

From your vantage point, what is the state of black business? Are these companies gaining ground or treading water?

We’re actually gaining, and, and the reason is due to the amount of capital that’s actually in the environment now. If you remember pre-recession, there wasn’t a lot of emphasis on small business lending. People didn’t think that it was profitable. After the recession, as institutional investors started trying to find a place to put their money, they realized that the growth engine has been around small businesses. So there’s been a significant amount of capital that has poured into this space.

So have black firms been able to gain access to this capital?

Now what’s missing, and we’re solving for that at Fifth Third, is how to get that information to African American and minority-owned businesses. The interesting thing that’s allowed us to do that is the whole digital framework. There’s no reason someone shouldn’t have access to this information through word of mouth, digital, and social media. We’ve been really mindful at Fifth Third of building that ecosystem to connect them to the capitalists out there. Once they have the capital, how do they scale? How do they build their businesses?

So there’s different organizations that we support across our footprint. We try to focus on what I call “Urban Entrepreneurship.

WHAT IT TAKES TO BE AN URBAN ENTREPRENEUR

How do you define urban entrepreneurship?

It is different than your typical small business entrepreneurship. Urban entrepreneurship is someone who has an idea, a passion, and a skill they’re really good at a skill and try to figure out how to monetize it. With this ecosystem, we could actually develop those businesses and those individuals which I believe where our growth is going to come.

What is the financing model for urban entrepreneurs?

The No. 1 source when you want to start a business, outside of your friends and family, is the bank. So we’ve realized at Fifth Third we can say yes 50% to 60% of the time. That’s the best it’s going to get. So then we figure out how to take the money that we have and invest in other lending funds so that we can get to a 100% yes. So I can get you there 60% of the way but for that other 40%, we refer you to our partners who have capital on the sidelines that they can employ to help your business.

I think a banking relationship is one of the most underrepresented resources out there. It’s free information. A bank’s job is to provide you with access to capital and information, and information in the form of advice and insights about your industry and company. We don’t use them that way.

We use them as a product. I need a checking account or a loan then I go to the bank. What we’ve been trying to push is you come in the bank when you have a question.

What type of questions?

How do I scale my business? How do I approve this product? How do I actually network? Who do I need to know? You should come to the bank because we have all that. Instead, we only come when we actually need something. One of the things that I’ve tried to stress is that you have to build a relationship before you actually need it because when you need it’s too late.

How do you get entrepreneurs to change their approach to banking?

One of the things we’ve been trying to do at Fifth Third demystify [banking] and [communicate that] I’m approachable. We can have a conversation. And we need to get more folks in the business who look like us so that we feel comfortable and we can have that conversation.

Do you view innovation as a driver of the urban entrepreneurship ecosystem? How do you support that?

Digital transformation allowed people to be able to have a business without brick and mortar and be extremely successful. So I think that that was one of the things that changed the game and reduced the barriers for owning a business. One of the interesting things that has allowed us to actually be able to take advantage of this growth is e-commerce. Now folks say, “I don’t need a building.” I could do this from my house now because of this supercomputer that we’re walking around with in our pockets. I think the idea around urban entrepreneurship is taking these young men and women who have great ideas on how to network and [help them] actually expand and monetize that.

SCALING YOUR BUSINESS FOR LUCRATIVE CONTRACTS

In your role at NMSDC, how do you advocate creating that bridge so that we have more companies that can take advantage of corporate contracts?

I’m the only lending head of a business that’s actually on the council board. One of the reasons that’s important is I can bring that kind of perspective. One of the challenges that’s happened over the last 20 years is this massive consolidation of vendors. Companies have gotten comfortable that all they need is one or two. That’s why you have to scale up. So that you can create this supplier ecosystem. The ultimate goal is that a Tier-2 supplier can eventually become a Tier-1 supplier. That’s the measure of success.

So how can we create more billion-dollar companies? Does it require more consolidations of the African American firms?

So this is probably controversial but I don’t think the goal should be to create more billion-dollar companies, I think the goal should be that we create more $100 million and $500 million companies. If we’re focused on that lower end and creating more of those firms, they will turn into those billion-dollar companies. What happens is that we’re so focused on bigger numbers right that sometimes we miss the bus.

So should we look to private equity firms to play a role in funding that growth?

This is going to be controversial as well. I’m not a big fan of private equity groups because their main goal is maximizing their return. When you’re looking at these businesses, you’re trying to figure out that it’s more than just maximizing return. It’s about creating opportunity for everybody.