With roughly three months before the first contest of the Democratic presidential primary season, Sen. Kamala Harris is placing all her political chips on Iowa. In a memo sent to staff and top donors, campaign manager Juan Rodriguez spelled out how the California senator was radically restructuring operations to maximize outreach throughout the state. To bolster its war chest and beef up its ground game at this most critical stage, the campaign blitz calls for significantly slashing salaries and staff at its Baltimore headquarters as well as redeploying those operating out of campaign offices in New Hampshire, Nevada, and California to Iowa “for the home stretch of the caucus campaign.”

“To effectively compete with the top campaigns and make the necessary investments in the critical final 100 days to the caucus, we need to reduce expenditures elsewhere and realign resources. From the beginning of this campaign, Kamala Harris and this team set out with one goal—to win the nomination and defeat Donald Trump in 2020. This requires us to make difficult strategic decisions and make clear priorities, not threaten to drop out or deploy gimmicks,” the memo stated.

News of the realignment was first reported by Politico and news organizations like CBS News obtained copies of the memo. 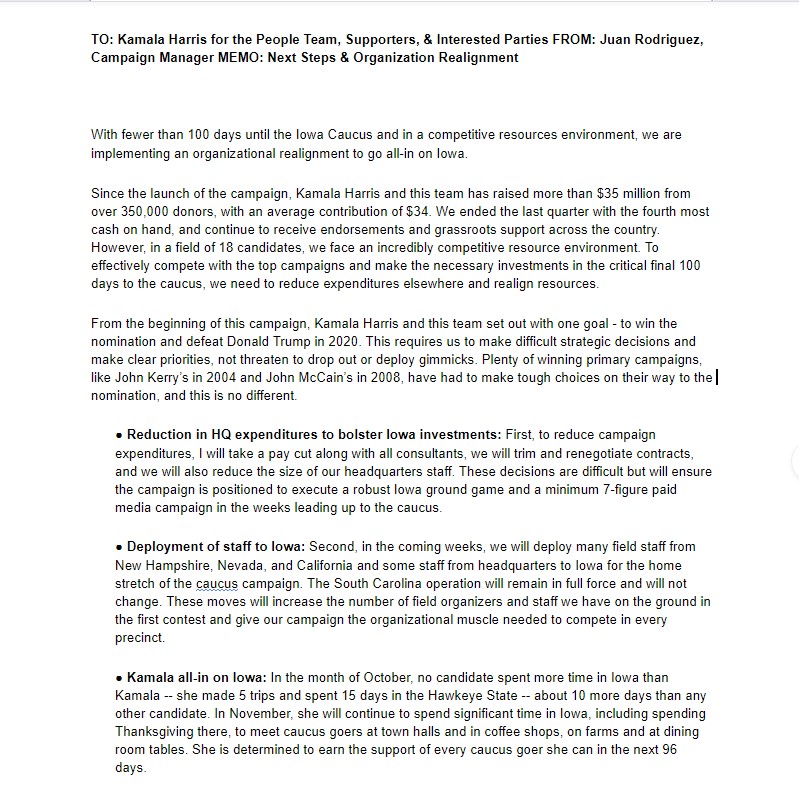 The memo further stated that Harris has raised a total of $35 million through 350,000 donors. But the campaign has yet to recapture the momentum gained after the first Democratic debate in June. Since then she has seen a precipitous drop in both campaign contributions and poll standings. For instance, CBS News reported that Harris raised $11.7 million in the third quarter behind the campaigns of Sen. Bernie Sanders ($25.3 million), Sen. Elizabeth Warren ($24.6 million), former Vice President Joe Biden ($15.7 million), and South Bend, Indiana Mayor Pete Buttigieg ($19.1 million). She also trails behind them in the latest polls—as pointed out in The New York Times on Wednesday, despite the diverse field of candidates, all Democratic frontrunners are white.

Based on historical trends, Harris believes that she can reverse her electoral fortunes in the Hawkeye State. According to the memo, she “will continue to spend significant time in Iowa” throughout the month of November, including through the Thanksgiving holiday. Rodriguez wrote in the memo: “She is determined to earn the support of every caucus goer she can in the next 96 days.”

Political observers maintain that this type of radical repositioning has not been an unusual tact heading into presidential primaries—especially with an emphasis on the Iowa Caucus. Such a massive overhaul, however, must occur by the beginning of November to amass resources necessary for impact. In fact, the Harris campaign pointed to past presidential nominees on both sides of the aisle to communicate that the realignment could prove to be a successful strategy for Iowa and beyond. The memo stated: “Plenty of winning primary campaigns, like John Kerry’s in 2004 and John McCain’s in 2008, have had to make tough choices on their way to the nomination, and this is no different.”