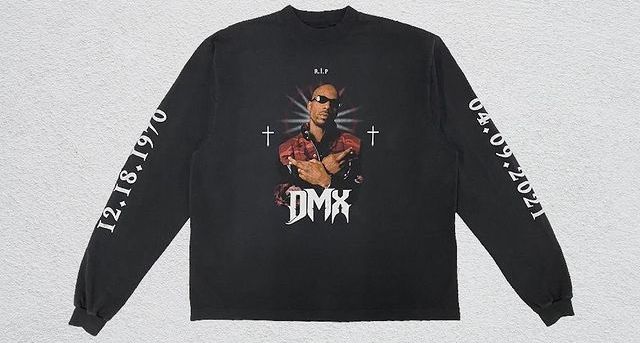 The prayers and well-wishes for Earl Simmons AKA DMX have been well-documented as his life is being celebrated throughout the hip-hop world. Fellow hip-hop artist, Kanye West has collaborated with Balenciaga to release DMX tribute shirts that will benefit the family of DMX.

According to Complex, the shirts, commissioned by West and designed by Balenciaga, have raised approximately $1 million. The shirts were promoted on DMX’s Instagram account:

The shirts, which have sold out in just 24 hours, were priced at $200 a piece and the net profits are going toward DMX’s family.

During the rapper’s recent funeral service over the weekend, two sisters in the movement– Erica Ford, cofounder of Life Camp, and Priscilla Echi, a community activist from Westchester County, revealed that the state of New York declared Dec. 18– Earl “DMX” Simmons  Day.

“Today NYS Senate introduced a resolution on the floor to honor Earl “DMX” Simmons.
Senate Majority Leader Sen. Andrea Stewart Cousins, and Sen. Jamal T. Bailey, spoke eloquently about his work, and the impact he’s had on us all.

“Earl you are written into history! Incredible day for Hip-Hop as a whole. It was so powerful!
Thank you to our amazing Senators who made it possible!!@andreastewartcousins & @jamaaltbailey36!
May God be pleased with his work.
Long live Earl “DMX” Simmons 🕊🙏🏾.”