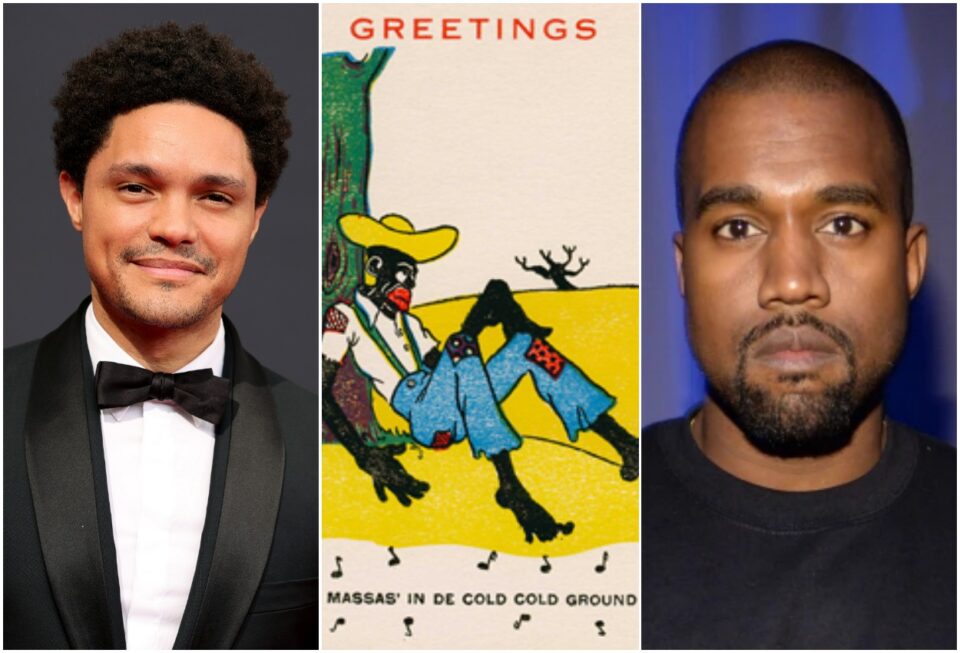 Trevor Noah was added to Kanye West’s growing hit list after the comedian got serious and addressed the rapper’s “harassing” behavior toward Kim Kardashian.

During Tuesday night’s episode of The Daily Show with Trevor Noah, the late-night host explained why people should “pay attention” to Kanye’s disturbing behavior against Kim and her new boyfriend, Pete Davidson.

“It started very much in the land of tabloid,” Noah said. “But I feel it’s creeping and has crept into a world that more people should pay attention to but not for the reason that you may think.”

Unpacking the Kim-Kanye-Pete situation and the harassment many women face when trying to leave a relationship. pic.twitter.com/qF3cfiYL9R

Noah provided a timeline on Kanye’s latest “belligerent” antics against Kim and Pete, including his two music videos for his single “Eazy,” where he buries Pete alive and beheads the comedian. While Kanye tried to defend the visuals as his “art,” Noah said the videos made him feel “uncomfortable” watching Kim “being harassed.”

Referencing the recent heated text message exchange between Pete and Kanye, Noah called out Pete for mocking Kanye with his “in bed with your wife” text while the comedian offered the rapper advice on treating mental health.

Noah offered his sympathy to Kardashian despite all the criticism she faces for her lavish reality star lifestyle and cultural appropriation accusations.

“You may not feel sorry for Kim because she’s rich and famous, because of the way she dresses, because she appropriates Black culture, because she tells women they’re lazy, broke the internet and then didn’t put it back together, whatever, you hate her,” Noah said.

“But what she’s going through is terrifying to watch, and it shines a spotlight on what so many women go through when they choose to leave.”

Noah revealed his experience with domestic violence and how his mother was told she was “overreacting” before being shot in the head by Noah’s stepfather.

“As a society, we have to ask ourselves questions,” Noah said. “Do we wish to stand by and watch a car crash when we thought we saw it coming?”

But once Kanye caught wind of Noah’s segment about him, the Yeezy founder took to Instagram to call the South African comic a “Koon,” TMZ reports.

The reference “Koon” seemingly refers to the word coon, a highly offensive word to Black people.

According to Ferris.edu: “The name itself, an abbreviation of raccoon, is dehumanizing. As with Sambo, the coon was portrayed as a lazy, easily frightened, chronically idle, inarticulate, buffoon.”

In addition to calling out Noah, Kanye continued his ongoing feud with DL Hughley after the comedian also called out Kanye’s “harassing” behavior.

Kanye’s most recent posts are the latest in a series of social media attacks he’s launched in the wake of Kim moving on with Pete.