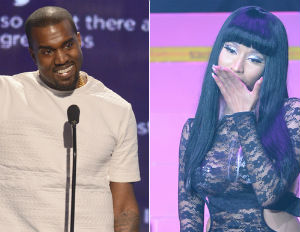 From the Grio and New York Daily News.

Kanye West and Nicki Minaj are the latest celebrities to be rumored to judge American Idol this fall, according to various reports. West is reportedly in talks with Idol producers about filling the vacant judging seat, however, the controversial rapper is said to be unsure. Minaj’s name has also been mentioned among the many rumored contenders, though according to sources, Minaj’s chances at nabbing the job is very likely, with one source claiming it to be “100 percent confirmed.”

If either artist decides to judge the singing competition, they would join Randy Jackson and newly signed judge Mariah Carey. Former judges Jennifer Lopez and Steven Tyler left the panel after serving two seasons on the show. If either West or Minaj joins Jackson and Carey, it would make the judging line-up the first all African-American panel in the show’s history.

Read more at the Grio and New York Daily News.