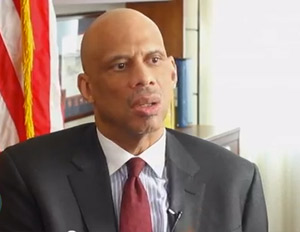 Arguably one of the greatest basketball players to ever hit the hardwood, Kareem Abdul-Jabbar has continued to make major contributions to our society off the court. In 2011, he was awarded the prestigious Lincoln Medal for his commitment to education, understanding and equality–values President Abraham Lincoln held in the highest esteem. More recently, Abdul-Jabbar made history as the first former professional athlete to be named Global Cultural Ambassador for the United States. This adds to a long list of milestones in the NBA Hall of Famer’s career, which includes all-time leading scorer withÂ 38,387 points, No. 1 draft pick, six-time MVP, six time NBA champion and best-selling author of seven book. Further, his infamous “Sky Hook,â€ once a nightmare for defenders, is now responsible for making many dreams come true through the Sky Hook Foundation. With a degree in history from UCLA, Abdul-Jabbar has also produced several projects related to Black history and socioeconomic justice, including his documentary, On the Shoulders of Giants: The Story of the Greatest Basketball Team You Never Heard Of. BlackEnterprise.com had the opportunity to speak with Abdul-Jabbar about his new government position and his mission to elevate the minds of young African Americans.

What are your goals as Global Cultural Ambassador?

The Department of State wants people in that position to be able to go and talk to people in various places around world regarding what the United States is all about. They would also like us to answer questions based on our own personal experiences living here in America. I want to follow through with everything they set out for me to do.

Why do you think the position is important?

I think the position is important because instead of a professional diplomat, where people expect them to just adhere to whatever they have been told to say, they can hear from someone like me, who is basically just a citizen, in that respect. I have been able to achieve a lot of success as an athlete and in other areas but I still do not have that formal background. People will more or less feel that I will give a straight answer and it will not be something that is pre-programmed and digested or diplomatic and processed but just put out there.

Did you experience any difficulty or nervousness transitioning into the new position and working with U.S. Secretary of State Hillary Clinton and other government officials?

Not really because it happened so fast, I did not have time to. Within a period of 10 days I was told that they wanted to appoint me to the position. I was honored and accepted. Shortly thereafter they wanted me to get ready to go. I left for my first assignment to Brazil, El Salvador and Rio de Janeiro, a couple of days after the announcement was made.

So you were just thrown right into the fire?

The Department of the State gave me an orientation. For each place I was assigned to go, they gave me background information on that country and outlined what my assignment would be. I will not necessarily be taking directions from Mrs. Clinton, but will work with the individuals that will handle that aspect of the work I will do.

What were your duties while you were in Brazil?

While in Brazil, I met with groups of young people mainly and talked to them about the value of their education and answered questions about what America was all about. They also, of course, wanted to ask me about hoops so I answered many of those questions as well. I had a great time in Brazil. The kids I got to talk to and their parents were really fantastic and had a great presence about them.