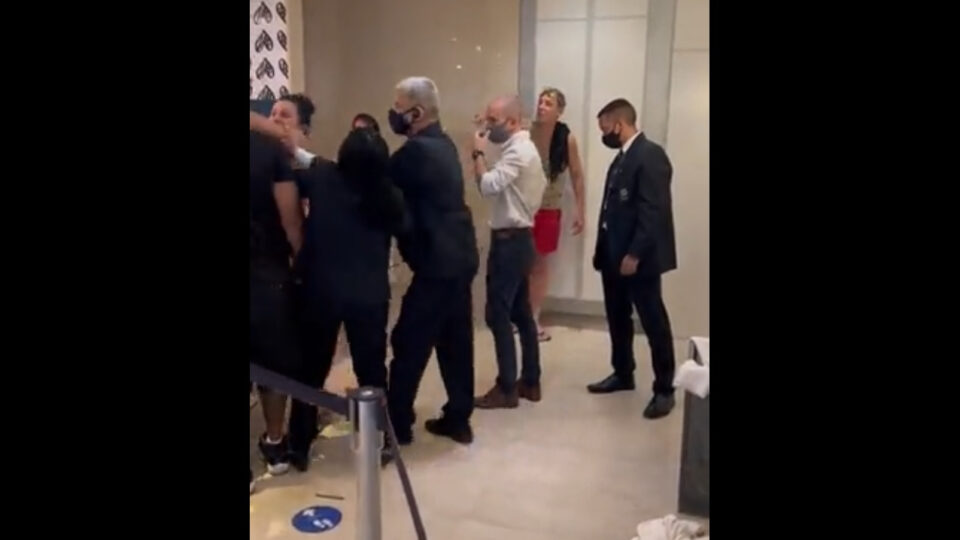 Happy New Year to everyone but this “Karen” who was caught on video attacking a Black man who she reportedly felt she was more superior to.

On New Year’s Day at a Hilton Hotel in Rio De Janeiro, Brazil, a racist encounter was caught on a mobile phone video when an unnamed white woman clearly assaults and attacks a Black man who was at the front desk counter seemingly checking in, The Daily Dot reports.

The Black man, who was allegedly a Hilton Diamond member, was being taken care of before the white woman and the white man she was with. Apparently, that hotel courtesy didn’t sit well with the woman who starts going ballistic as the phone footage captures what happens next.

As what appears to be four security personnel witnessing the altercation, the white woman, clearly agitated, approaches the calm Black man and has the audacity to grab him by his locks, and tries to pull him towards her.

Security doesn’t effectively de-escalate the situation either. And after the Black man is attacked by the woman, he then strikes the man she is standing with, knocking him out cold in the process.

Even after knocking her companion out, security is unable to contain the woman. The Black man returns back to the line calmly as security continues to try to subdue the woman who is still causing a ruckus.

Minutes later, with security still doing nothing to stop this woman, she goes to attack the Black customer once again as security escorts the man from the scene.

All of this is captured on another person’s phone.

Watch til the End, Drunk Racist Man and woman mad because he’s Gold Or Diamond Hilton member and therefore gets service before everyone else. Hotel staff just sitting by and letting the racist woman do whatever, mind you she already touched him prior #Karen #hilton pic.twitter.com/tApFW53z2a

Another clip shows the woman still on the attack without restraint.

So she really Likes to hit other people, including White Privilege at it finest 🤷🏼‍♂️😩😩 pic.twitter.com/EkmUsxXKRx

The gentleman who was attacked asked the person who shot the video to send him the clip as Hilton employees did nothing to stop the woman. He also stated that the white couple called the police. The man wasn’t able to stay at the hotel that night because they lied to the police and claimed that he attacked them and they waited for him to return.

Can you please send the video to me so I can send to Hilton headquarters, because of this security failure the couple had the police waiting outside looking for me for hours I couldn’t stay at the hotel that night because they lied saying I attacked them. Thanks for recording🙏🏾