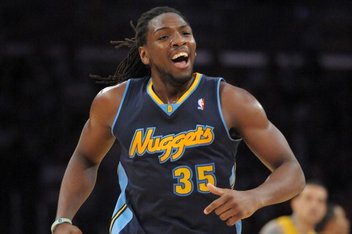 “Becoming an Athlete Ally gives me the opportunity to spread a message of inclusiveness throughout the NBA and our country,â€ he said in a statement.

The move comes afterÂ the 23-year-old rookie declared his support for same-sex unions in an online video for advocacy group, OneColorado, while sitting beside his birth mom and her wife of six years, who raised Faried in his hometown Newark, New Jersey.

Other athletes who join Faried in supporting Athlete Alley areÂ Brendon Ayanbadejo of the Baltimore Ravens, Chris Kluwe of the Minnesota Vikings, Scott Fujita of the Cleveland Browns and Connor Barwin of the Houston Texans.