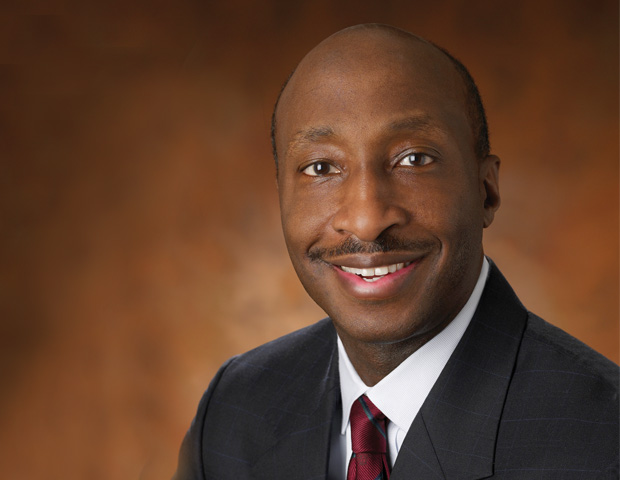 Merck's CEO and BE 2017 Corporate Executive of the Year, Kenneth Frazier.

Kenneth Frazier of Merck is one of three African American CEOs running a Fortune 500 company as of March 2018. Frazier, BE’s 2014 Corporate Executive of the Year, whose company has been at the forefront of the push for innovative treatments for cancer and immunotherapy drugs, gave an interview with to the New York Times. Here are some of the highlights:

Frazier spoke about his father, a janitor, who grew up in 1900s South Carolina and was deprived of education. He said his father, who was mostly self-taught, read two newspapers every day. His grandfather, Richard, born into slavery in the late 1850s, was a sharecropper in South Carolina for his entire life.

“I had a fantastic upbringing by two parents who cared deeply about their children, but more importantly believed that anything was possible for their children.”

HIS EXPERIENCE IN SOUTH AFRICA:

Frazier graduated from Pennsylvania State University, earned his law degree from Harvard Law School before joining Drinker Biddle & Reath because of the pro-bono work the firm does. He moved to Soweto to fill the need for American lawyers in South Africa because black law students in the country at the time, under apartheid, weren’t allowed admission to the top-tier law schools.

“What I remember more than anything else was interacting with people who their entire lives had been told that they were second class, that they were inferior, and how hard it was to get particularly the men to speak up in audible tones, because they had been in many ways told that their voice was not worth listening to. In addition to trying to teach people the substantive legal issues, it was a lot about trying to instill self-confidence.”

As a lawyer at Drinker Biddle & Reath, Frazier helped Merck fend off numerous lawsuits over Vioxx, a painkiller that posed heart risk and was pulled off the market. At the height of Frazier’s legal career, he took on a criminal case involving James Willie “Bo” Cochran, a black man on death row for a crime he did not commit. Frazier won his release from federal prison in 1997.

“The central allegation that was underneath the Vioxx litigation was that this company put profit before patient safety. That went to the core of who we are as a company, and there was no way that we could allow that story to be unchallenged. We did not want Vioxx to become a verbal shorthand, like an Enron or something of that nature, for corporate wrongdoing. The most important role of a leader is to safeguard the heritage and values of the company.”

HIS ROLE AS A PHARMA EXECUTIVE:

Over the past couple of years, there have been high profile stories about the greed and corruption of pharmaceutical companies who have hiked prices on life-saving drugs. His company recently acquired Viralytics, an Australian biotech company for $394 million, which is in line with the drug maker’s focus on cancer immunotherapy.

“There are lots of examples of companies that have lost their way because they’ve sort of lost their soul, which is a funny word to use, but companies do have souls.”

HIS PUBLIC SPAT WITH PRESIDENT TRUMP:

Last November, Frazier gave up his seat on President Trump’s American Manufacturing Council after controversy erupted over how the president handled the racist-fueled violence in Charlottesville, VA.

“In that moment the president’s response was one that I felt was not in concordance with my views, and I didn’t think they were in concordance with the views that we claim to hold as a country. It was my view that to not take a stand on this would be viewed as a tacit endorsement of what had happened and what was said.”