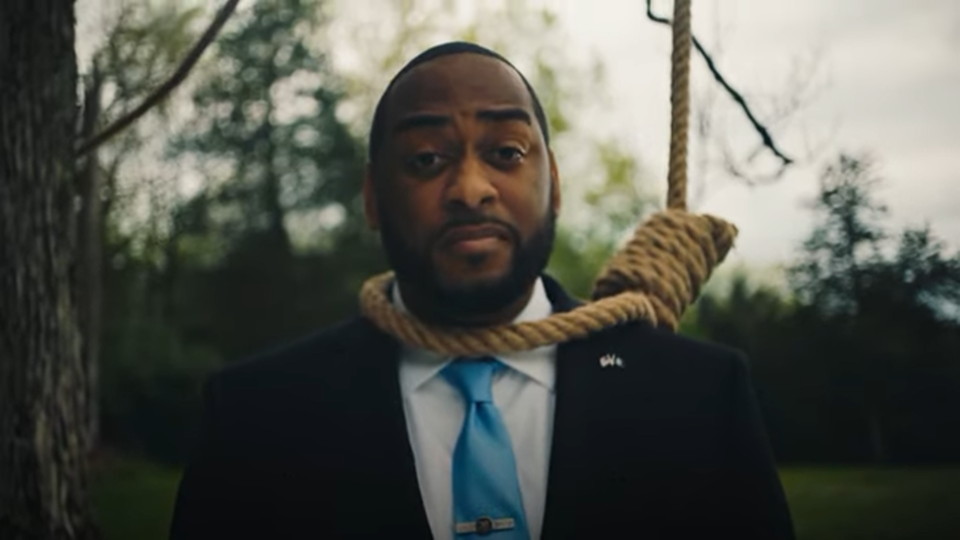 “In Kentucky, like many states throughout the South, lynching was a tool of terror. It was used to kill hopes for freedom. It was used to kill my ancestors,” Booker, the former Kentucky lawmaker, says in a suit jacket, button-down shirt and tie, a noose around his neck. “Now, in a historic victory for our commonwealth, I have become the first Black Kentuckian to receive the Democratic nomination for U.S. Senate.”

About 30 seconds into the ad, which lasts just over a minute, Paul is seen as Booker mentions his voting history and previous statements on race.

“My opponent? The very person who compared expanded health care to slavery, the person who said he would oppose the Civil Rights Act. The person who single-handedly blocked the Anti-Lynching Act from being federal law.”

The ad fails to mention Paul supported an updated bill, the Emmett Till Antilynching Act, that passed the Senate in March and was signed into law by President Joe Biden. That same month, Paul admitted to the Louisville Courier-Journal that “it wasn’t a popular stand to slow this bill down,” but believes it was the right thing to do. Paul did support the updated bill introduced by Sens. Tim Scott (D-SC) and Cory Booker (D-NJ).

The two men will face off later this fall for Paul’s Senate seat, which he’s held since 2011. According to Real Clear Politics, Rand has a double-digit lead on Booker.

In addition to his views on the Civil Rights Act and his comparison of expanded health care to slavery, the Kentucky senator has also said the government shouldn’t require private businesses to serve customers of all races among several other strange statements.