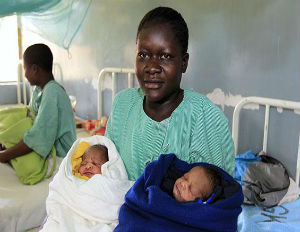 It may be a recipe for sibling rivalry, but on Election Day, a 20-year-old Kenyan homemaker named her newborn twins Barack and Mitt in honor of the United States presidential candidates, Barack Obama and Mitt Romney.

“I named the first twin Barack and the second one Mitt,â€ Millicent Awuor told Reuters.

She had the twins at a hospital in Slaya, near where President Barack Obama’sÂ relatives, including his half-brother, live.