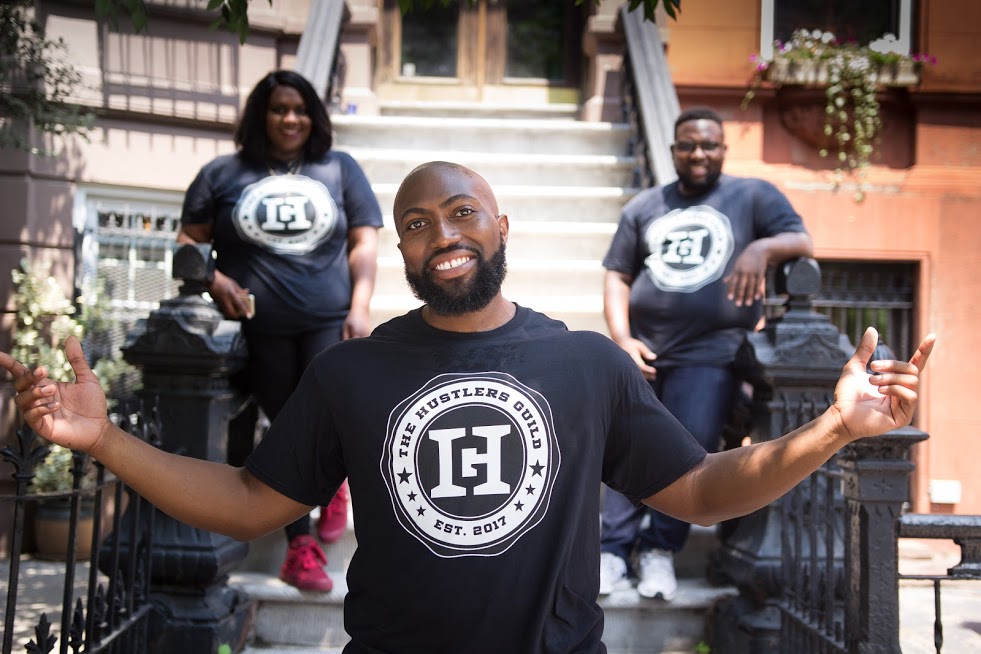 I am the co-founder of The Hustlers Guild, an organization that uses hip-hop to dismantle the inequities in technology by building black/Latinx pipelines within the tech ecosystem. Through strategic partnerships, capacity building, and diversity equity and inclusion consulting, we help companies and organizations recruit and elevate black/Latinx talent. We also use hip-hop to expose over 1,500 middle and high school students to coding and technology skills. In addition to my role with The Hustlers Guild, I serve as an advancement manager for the Urban Assembly, a phenomenal network of public schools in New York City.

I love social entrepreneurship and working with black/brown young people. My path to social entrepreneurship was unexpected but very organic. After teaching at the middle and high school level in Philadelphia, I worked for the Obama White House Office of Presidential Correspondence as a political appointee. Recognizing the lack of access black and brown people had to educational and tech opportunities via policy, I decided to do something about it with my amazing fellow White House alumni Yasmin Salina and Jason Spear, and that’s how we launched the Hustlers Guild.

In addition to working toward forging partnerships and building capacity for black talent in tech, I mentor and write a lot. I love to write. I’ve contributed commentary on the topics of equity education, political representation, black tech, and the dangers of respectability politics to platforms such as the New York Amsterdam News, The Washington Post, The Afro [the Baltimore Afro-American], the Washington Informer, and Huffington Post.

I am most proud of my cousin Nathan. He is an amazing 20-year-old man living with autism. He is my heart and he’s lived with me for the greater portion of my life. He is my joy. He’s not verbal, but he communicates so much love and joy in every interaction. He’s also a ‘G’ in the truest sense. He’s so chill. I’m so proud of the smart, charming young man that he has grown to be, and I’m proud to have played a role in his development. He keeps me going.

My life is a testament to the power of God and the beauty that exists on the other side. I’m numb to the word no. Those nos built a person determined to get a yes. Circumstances have been telling me no for most of my life, and that pushed me. I’ve never been one to accept a no. Tell me no, and I’ll find the possibility in the situation.

Immediately after leaving the White House at the close of President Obama’s second term, I was struggling to transition to a position in tech. As positions within tech were slipping [from] under my feet (and for many of my black/brown peers), I grew annoyed and angry with the racism that presented so many barriers for black/brown people. When my co-founder Yasmin asked me to join in partnership with launching The Hustlers Guild to build up opportunity for black and brown young people, I could not say no. At one of the most uncertain times in my life, came the most fruitful endeavor I’ve been a part of, and I am grateful for it.

My Uncle Cliff is a major role model for me. He was a presence in my life from the time I was very young and remains so today. On weekends, he would make me read newspaper articles and craft thoughtful analysis around the content. He exposed me to fitness and took me to the gym. He had me doing push-ups and analyzing church sermons on Sunday afternoons. Before the age of 10, I had a very strong exposure and understanding of black consciousness, national politics, and Greek mythology, among other things. I was not raised with my father or mother (both of whom I am close with and love dearly), so his guidance and love was everything for me.

I live by two pieces of advice given to me:

Deacon Mobley, a deacon at my home church growing up, used to always tell me to stay prepared, and that “Planning Prevents Poor Performance.” To the fullest extent possible, I try to plan for the inevitable and just be ready for anything.

My grandmother, Icemae, has delivered a great deal of advice around treating all people with love, regardless of a title. She’s always told me to respect and esteem those in positions without the title or the credential that society would value as much.

A lot of great black men and women have invested in me. As a child raised without a mother or father present, the mentorship and love of others have meant the world to me. I owe a lot of who I am to the great men who helped me become the man that I’ve become. My uncles, church deacons, coaches, pastor, and teachers were vital in helping me become the man that I am. A lot of people have poured into me and now it is my turn to do the same.

I mentor quite a few black men, both younger and older. From reviewing college applications to building with other black male social entrepreneurs to editing résumés for neighbors, I try to do my part in whatever big or little way I can. One of the most fulfilling things I do is organize college readiness workshops for youth. With a few black men who graduated from Yale with me (my brothers for life Victor Kwansa and Rashaud Hannah), we train youth on how to write effective college application essays.

In whatever capacity possible, we should all strive to mentor and pay it forward.

To me, manhood is being fully confident and unapologetic in who you are and who you are becoming. Manhood entails responsibility, accountability, strength, grit, resilience, and authentic love.

To be a black man is to be strong, powerful, creative, and confident. I love how supportive and esteeming we are of each other and others. We are builders. We are supporters. We are the truth.