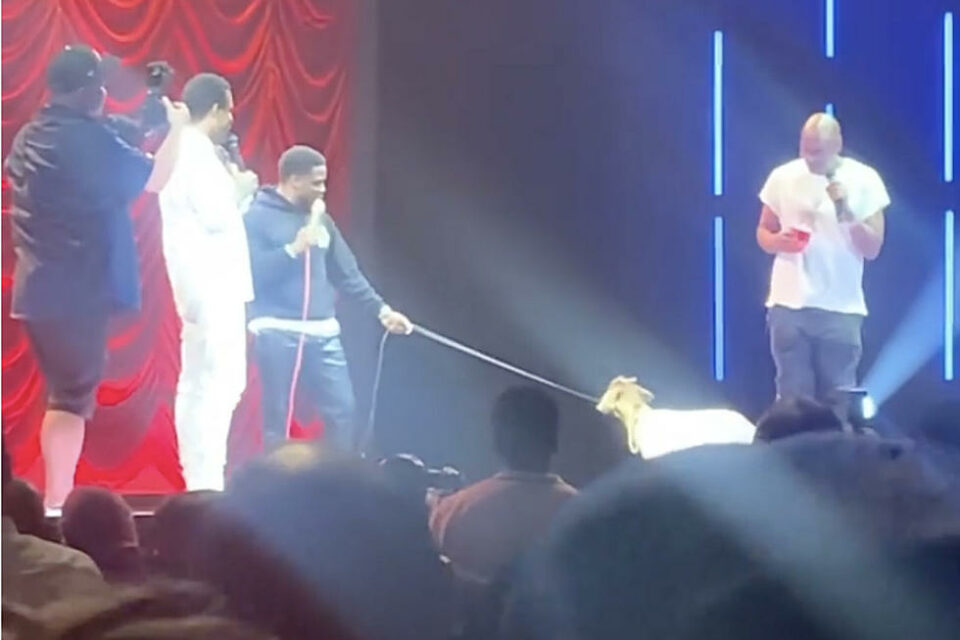 Over the weekend, two popular comedians came together to give New Yorkers a chance to see comedy greatness.

When Brooklyn’s own Chris Rock and Philly-native Kevin Hart touched down at Madison Square Garden on July 23, there were two surprises — one being a surprise bonus when Dave Chappelle opened the show for the Rock Hart: Only Headliners Allowed Tour.

The audience also received an additional bonus when Hart presented Rock with a live goat named Will Smith.

As the show at Madison Square Garden was in its final stages, Hart, Rock, and Chappelle had fun interacting on stage. Hart comes on stage with a goat and presented it to Rock as Chappelle looked on. Of course, jokes ensued between the three comedians.

Rock replies, “I have an apartment, Kevin.” Hart then says, “That’s not my problem.”

As the trio laughs, Rock replies, “They barely let n**gas in there.”

Chappelle joins in by asking, “What are you going to name this goat Chris?” As Hart interjects, “The name is Will Smith.” As everyone in the arena laughed, Hart asked, “What? What did I say?”

Yahoo Entertainment reported that Hart explained why he gave Rock that goat on Saturday night when he appeared on The Tonight Show Starring Jimmy Fallon Monday.

“You know, you guys don’t know, Chris is a mentor, friend, inspiration. He’s a large part of the reason that I am where I am today in my career just from his advice, his insight, et cetera, and he’s my G.O.A.T.”

Last night was by far the best moment of my career…I can’t even explain it…I can’t find the words…Just know that last night was the true definition of a “EPIC NIGHT”…I love my brothers more than words can explain. We made history last night!!!#RockHartChappelle pic.twitter.com/x1XtRXZQCO