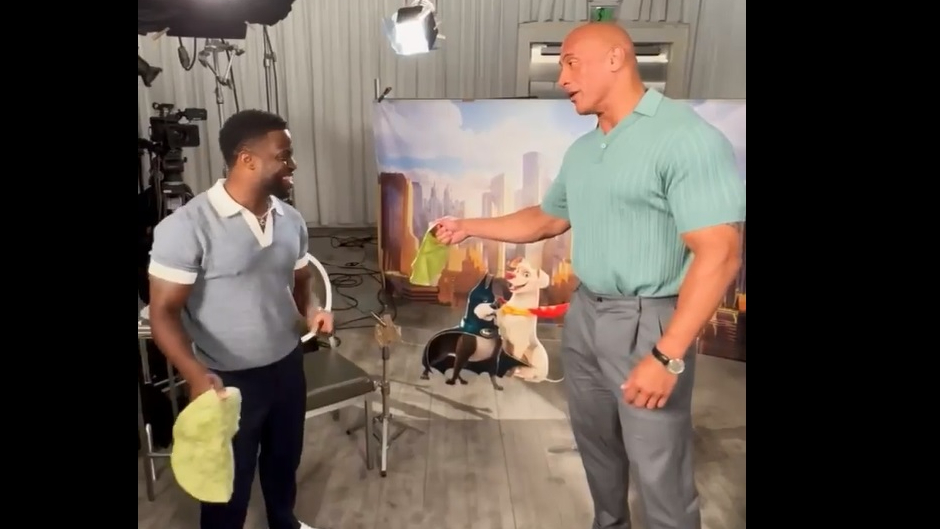 Kevin Hart and Dwayne “The Rock” Johnson are always clowning around as they are always showing the world how best friends should interact. So, it comes as no surprise that the two are at it again!

With an upcoming movie being released at the end of the month, the two actors have started their promo run and have taken on one of the latest viral challenges.

While promoting DC League of Super-Pets movie the duo decide to do the TikTok Tortilla Slap Challenge. The basis of this particular challenge relies on each person filling their mouth with water as they hold a tortilla in one hand. They will start by playing a game of rock, paper, scissors. The winner will get the chance to slap the other person in the face, unobstructed with the tortilla. The goal is to do so until the opponent eventually spits the water out of that person’s mouth, from the laughter that ensues from the actions.

Hart wins the rock, paper, scissors challenge and proceeds to set The Rock up for the tortilla slap. As The Rock waits patiently for Hart to slap him, Hart can’t contain his laughter. As the two exchange chatter and giggles back and forth, Hart finally strikes The Rock with his tortilla.

They run it back and Hart emerges victorious again! You can tell the genuine love they have for one another as you view the video. The connection shown gets you excited to actually want to see the DC League of Super-Pets movie.

The pair end the video clip by encouraging folks to run out to see the movie which is in theaters on July 29.

“Our @DCLeagueOfSuperPets is IN THEATERS July 29th!