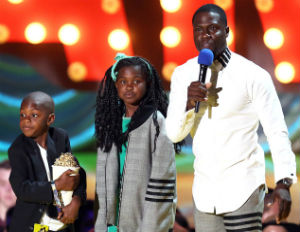 Hart then proceeded onto the stage to give his speech, bringing his daughter Heaven and son Hendrix with him. During his acceptance speech, the comedian-actor thanked his ex-wife, fiancÃ©e, manager, production company, and loyal fans for the continuous support. Hart stated, “I wanna thank my fiancÃ©e for being my rock right now.Â  I wanna thank my ex-wife for giving me these two kids who are my best friends right now; Heaven for being the most amazing daughter, Hendrix for being the most amazing son. My kids, I’m doing all of this for them. I’m trying to leave a legacy for them. Last but not least my fans–this is for y’all, I love y’all.”

Earlier this month, the 35-year-old star embarked on the What Now? comedy tour, which is on track to be the highest-grossed comedy tour in history, according to Billboard BoxScore. This summer Hart will set another record, as he will be the first comedian to headline a stadium when he performs at Philadelphia’s Lincoln Financial Field.

What did you think of his speech? Share your thoughts with us below.