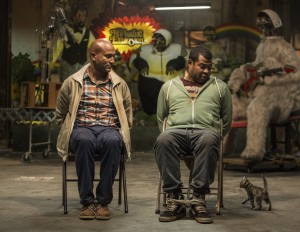 Picture this: two cousins that lack street smarts manage to impersonate ruthless killers in order to infiltrate a gang to rescue their beloved kitten.Â Hilarious, right? This is the premise behind New Line Cinema’s new action comedy KeanuÂ from the minds of Keegan-Michael Key and Jordan Peele a.k.a Key and Peele. The hugely popular comedy duo recently sat down with BlackEnterprise.com to rap about their first feature film and common themes in their work.

[Related: ‘Unfiltered’ Documentary about Rihanna in the Works]

BlackEnterprise.com: Jordan, I understand you and Alex Rubens wrote the film. Where did you come up with the idea?

Peele: We wanted to take the Key and Peele style of humor and make a movie out of it. The first script didn’t have Keanu in it. It was about this journey with these two guys and this weekend to find our inner bad ass. We needed something to bring us through the movie, to make sense of why we would stick our necks out like that. Keanu came to me in a matter of moments–a kitten named Keanu. The whole thing just stuck. It felt right and it made the movie bigger than Key and Peele. We have something else that people can latch on to, for those that don’t know Key and Peele.

WhoÂ was the inspiration behindÂ Rell and Clarence?

Peele: As aÂ kid, I had a stuffed animal that I lost on a field trip when I was 5 or 6, and it hit me so hard. Rell is based on me. There’s something about going back to that time of childhood and that purity, and finally figuring out how to fight for what’s yours and fight for your family. So [in the movie] Keanu is my family.

Key: Jordan knows me so very well.Â Clarence has a lot of the same fears and conflicts that I have in my life. I’m what you would call a people pleaser, which is something I’m working on all the time. Nia Long’s character, Hannah, saysÂ in the movieÂ “I want you to be who you are; I don’t want you to be what you think other people want you to be.â€ That’s his whole modus operandi in the movie. Once they try to find the cat, he’s in this situation in which a new part of him comes forth that he didn’t even know was in there. And he becomes very happy to explore that. So it’s wish fulfillment for me. Clarence tries to become a new man who believes in what he does and believes that what he thinks is as good as what anybody else thinks.

A common theme in your work is code-switching. How does that factor into Key and Peele and now Keanu?

Key: A lot of it has to do with the way we were raised. We spent a good deal of time in our life walking this tight rope of how black we’re supposed to be. I think we’re starting to enter an era–what does it mean to be black? This is something I’ve been exploring since I was a kid. Jordan has as well. Only now in the beginning of the 21st century, young people are experiencing blackness in their own way. They’re not ashamed of being “tough enoughâ€ or cool “enough.” It just is what it is. So part of our work is exploring our experiences from our lives and putting them on television.

Peele: We’re definitely inspired watching Obama do it on a daily basis. But I think what we’re also realizing is that it’s not just a black thing. It’s a very human phenomenon. Keegan and I call our mothers at home and we use a certain voice with them. When we are together and talking about girls or something, all of the sudden these other dudes come out. You can have facets of your personality with these different voices and they all can be true.

Key: It just becomes a part of our experience. Black culture is a spectrum, not a monolith. And only now are we starting to expose that.