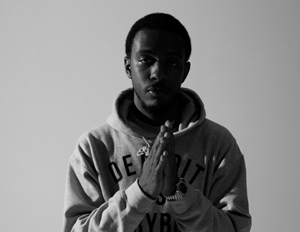 Today is Monday, and KeY Wane is conflicted. The rapper and fellow Detroit native Big Sean and his management team wants to fly him out to Los Angeles for the next three days to help put the finishing touches on Sean’s sophomore album, Hall of Fame: Memoirs of a Detroit Player, before Sean leaves the country for a couple of weeks. The cross-country trip would mean Wane would have to miss nearly an entire week of classes and, knowing that he’s already missed a few too many classes this semester, needs to focus on a couple of big assignments. He’s just left a sociology class, the last one of the day.

“There are always going to be chances to do the music thing once I finish,â€ Wane said, checking his calendar and messages on his iPhone. “I don’t want my mom paying for anything else. People get comfortable, I don’t.â€ He put the trip on hold.

KeY Wane, (real name Dwane Marshall Weir II), 22, hardly has typical college days anymore; most college seniors aren’t signed to publishing deals months before they get ready to take triumphant strides across a commencement stage. Most students are taking exit exams, mailing off graduation invitations to family and friends, putting finishing touches to senior projects. Wane is enrolled in a whopping six courses, 18 credit hours — just one credit shy from what would be considered an overload at the university. On top of that, he spends what little free time he has left in his home studio.

When classes finally end, a new set of challenges await. On December 15, Wane will get his B.S. degree in Commercial Music from Tennessee State, a historically black college situated just north of downtown Nashville. Then, three days later, on December 18, Sean’s album will hit the shelves. Wane’s production work on the album’s lead single, Guap, has already been heavily praised, and was last week’s highest charting debut on the Billboard R&B/Hip-Hop Songs list. Wane, who inked a publishing deal with Sean in April, is producing a lion’s share of the tracks on Hall of Fame, with the exception of a few produced by heavy hitters Kanye West and No I.D.

“School was something that (Wane) set out to do and now he’s completing it,â€ said Mike Brinkley, owner of On The Brink Music, the company that manages Big Sean and, now, KeY Wane. “He set a goal and he fully completed it. And he got good grades at the same time. It shows his character.â€

But back to those classes Wane has to focus on.

“Each morning, I’m up and in classes until about 2 or 3 (p.m.),â€ he explained. “After that, I go get food, go home, listen to songs and get to work. I’ve been doing it for so long I don’t know any other way to do it. It’s work until I sleep and wake up to do it all again. But this is what I’ve waited my whole life for. I feel like I have to do this.â€

Wane is also doing this for his mother, whom he calls his biggest inspiration. Wane said his mother taught him the value of hard work and perseverance.

“Even through a lot of fucked up shit, she always made a way,â€ he said. “She worked her hardest.â€

More than anything, she believed in his talents and supported his dreams. When Wane was 14, she helped him purchase his first pieces of music equipment. She enrolled him in piano classes. She was his cheerleader, his motivator and his support system, whenever he needed her to be.

“As a teenager, I never wanted to do anything but create music. I did other things that kids do like hang out with friends and go to the movies and stuff, but the music was what was most important to me,â€ he said.

And everything he put into music, the music gave back in return. His piano lessons exposed him to not only blues and gospel music, but also classical music and, even before his arrival to Nashville, a “little bit of country music, too.â€

The music even gave Wane his stage name. While sitting in on studio sessions at Capitol Park Studios, he’d be asked to use his “keyâ€ skills to add some soul to any random track produced by fellow Finally Famous group member Earlly Mac. From there, the “KeY Waneâ€ nickname stuck.

From playing at Sunday services at his childhood church in the west Detroit neighborhood he grew up in to buckling down and getting serious about his piano lessons in 10th grade, Wane said that every decision he made has put him closer to his dreams. This includes his decision to attend TSU in fall 2007, nearly 500 miles away from home. When Wane was getting ready to graduate from Cass Technical High School that spring, he’d also applied to Hampton University, the University of Michigan and Wayne State University. Tennessee State was one of the first to accept him.

“Going to TSU helped shape me,â€ he said. “It gave me an opportunity to do a lot of networking, visit studios here in Nashville and meet different types of people. Coming here, going to a HBCU, taught me how to succeed in the real world and tackle it with greatness.â€