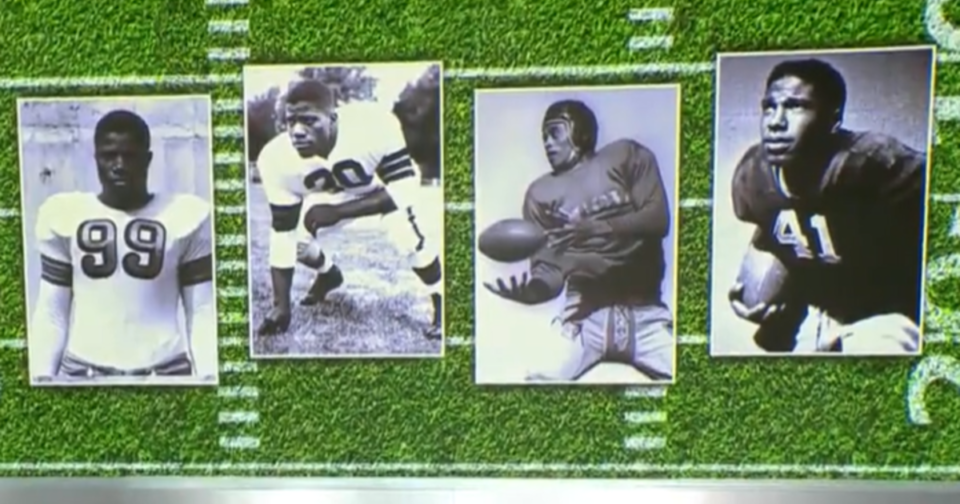 This season’s Super Bowl is now in the books and the season is officially over.

There is a racial discrimination lawsuit filed by former Miami Dolphins head coach, Brian Flores against the National Football League for the lack of Black head coaches in the league (One, with another multi-racial coach being hired last week, means there are now two Black head coaches among 32 football teams).

Currently, Black players make up approximately 70% of the NFL. The heat may be on for the NFL to take some type of action regarding the racial disparity amongst high-ranking positions.

There was a time when there were no Black football players in the NFL. Former player Keyshawn Johnson and award-winning NFL columnist Bob Glauber wrote a book about the first four Black men to play in the NFL.

Aptly titled, The Forgotten First, the book is about four young men who were the first Black players to cross that threshold to become professional players in a league that had no Black athletes. The burden of playing at a time where segregation was still alive and well affected the lives of Kenny Washington, Woody Strode, Marion Motley, and Bill Willis.

Before Jackie Robinson broke the racial barrier in Major League Baseball, a running back who attended UCLA, as well as being a teammate of Robinson in college, signed a contract with the Los Angeles Rams.

On March 21, 1946, Washington became the first Black man to sign in the NFL. Several months later, through the efforts of influential Los Angeles political and civic leaders, the team eventually signed the second Black player, Strode.

Later that year, a team in a rival league to the NFL, the AAFC (All-America Football Conference), the Cleveland Browns’ head coach Paul Brown signed running back Marion Motley and defensive lineman Bill Willis. The league eventually merged with the NFL.

Johnson told CBS News that when Brown signed the two players, he didn’t do it for the purposes of civil rights.

“He did it because he wanted good football players. … There was other owners prior to that that wanted to do it, but they just didn’t want to upset the other owners. They wanted to. He realized that, he was like, ‘Yeah, I got to have me something that’s gonna help me win,” Johnson said.

The play of Motley and Willis earned them entry into the Hall of Fame as they helped the Cleveland Browns win four straight AAFC championships. Washington only played three seasons with the Rams before injury and age forced him to retire. Strode only played one season, but he stayed in Hollywood to launch an acting career.