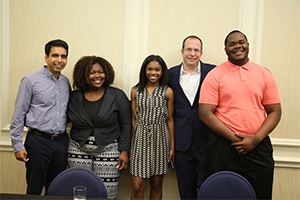 From left to right: Sal Khan of Khan Academy, Tatiana Thelusma, Valencia Grayson, David Coleman of the College Board, and Matthew Blue

Three students raised their SAT scores by a minimum of 200 points from their PSAT exam scores. (The PSAT is a preliminary SAT test usually administered before high school).

Two seniors at Booker T. Washington High School in Houston, Matthew Blue and Valencia Grayson; and Tatiana Thelusma, a senior at Oak Ridge High School in Orlando, Florida, all increased their scores from their PSAT/NMSQT scores: Blue, by 200 points; Thelusma, by 250 points; and Grayson, by an astounding 470 points! Each student studied about two hours a day every weekday.

How did they learn about the free Khan Academy SAT prep?

Impressed with their dramatic score increases, I asked the students what their greatest challenge was using Khan Academy. What seemed to me to require boatloads of discipline, the students seemed to take in stride. Instead, each was more challenged by the subject matter itself and said that studying with Khan Academy helped them improve as students overall.

David Coleman, CEO of the College Board, says, “Preparation prepares you for one thing. Practice prepares you for everything. Valencia, Matthew, and Tatiana are examples of what is possible through dedicated practice. There are tens of thousands of other students who are following the path they have blazed through practice on Khan Academy.â€

You Can Learn Anything

Because both Blue and Grayson play sports, they valued Khan Academy’s flexibility and portability. Blue was able to study around his practice schedule. Grayson says, “I could do it at home, on the go, wherever I went.â€

Thelusma says she stayed motivated to study “by thinking about where I wanted to go in life and what I wanted to do. I just wanted to be different. I didn’t want to be stuck in this one box where everybody thinks alike and does the same thing. I wanted to experience what I could do to get better.â€

But perhaps what was most powerful was what the students learned about themselves.

“I never knew I was this ambitious,â€ Blue said. “Discipline, ambition, and setting goals–Khan Academy [revealed] this about me.â€

Grayson said, “I can do anything I put my mind to.â€

Thelusma said, “Because of how well I did and what I achieved, the SAT score has made me expand my vision.â€ With a renewed sense of confidence, Thelusma is now considering going to school outside of her home state.

Sounds as if they’ve learned that they can learn anything.

For more information about Khan Academy, go to its website.