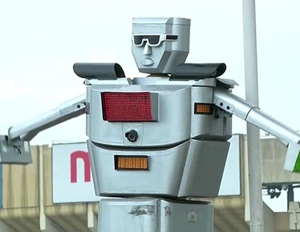 On Triomphal boulevard in Kinshasa, Democratic Republic of the Congo, human traffic cops have been replaced with a robotic one.

The bots are outfitted with four cameras that record and relay traffic information to a center where it can be analyzed for potential traffic violations, a way to increase the city’s revenue.

Standing eight feet tall and humanoid in appearance, they’re solar powered and impossible to miss. The robots are made of aluminum and steel to cope with Kinshasa’s hot climate.

According to CCTV in Kinshasa, the reactions from the community are generally positive, since there was no traffic light of any kind before the installation of the robots on the Triomphal Boulevard and Huileries Avenue intersections.

The project was spearheaded by a group of engineers from Kinshasa’s Higher Institute of Applied Technique, and hope the government will continue to expand the robot traffic cop program to other intersections throughout the city.

You can check out video of the robots in action below.