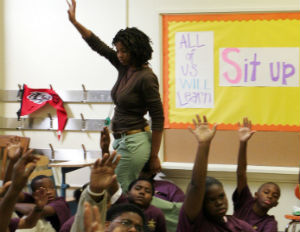 Towana Pierre-FloydÂ  was one of the lucky ones. Back when the lion’s share of schools in New Orleans was “pretty awful,â€ as Patrick Dobard, the superintendent of the city’s Recovery School District, says, teachers saw a light in young Pierre-Floyd’s eyes and steered her toward one of the city’s few select-admissions middle schools. After taking the school’s exam, she was admitted. “I had a fantastic experience,â€ Pierre-Floyd recalls. “I had opportunities to travel and to work with community organizations.â€ At the same time, even as a youngster she knew she was getting an education that was very different from that of her siblings and cousins.

Pierre-Floyd, today an assistant principal and instructional coach at KIPP Renaissance High School on the city’s west side, draws heavily on the rich experience of her own specialized education. “What I love about what I do now is we work hard to ensure that all students have a really rich, varied, and character-driven experience that will lead them to what I had been able to experience.â€

KIPP, the national network of public charter schools, considered by many one of the better charter networks–in 2014 several KIPP schools were recognized as National Blue Ribbon Schools by the National Alliance for Public Charter Schools–stresses character nearly as much as it does academics. That’s one way KIPP is different from what Pierre-Floyd experienced as a child: “We focus more intently on character than I found in my middle school or high school,â€ she says.

Pierre-Floyd believes so much in balancing academics with character education, she sends her own two sons to KIPP schools.

“We’ve done some research on the character traits that allow a student to persist. Schools have gotten better at getting kids to college–our focus has strongly been on to and through college.â€ To help her students develop that persistence, Pierre-Floyd says KIPP Renaissance “lives and breathes byâ€ the following character traits: grit, self-control, optimism, and zest.

Grit, which, though overused in some educational circles, is still a kind of virtue, means resilience, Pierre-Floyd says. “All people face challenges. But when you have grit, your automatic response is getting back up if you’ve been knocked down–it must become automatic.â€ There’s no indulging of feelings of defeat.

The goal is greatness.

Pierre-Floyd sees the character emphasis as essential to KIPP’s approach; it’s not an add-on. “Each KIPP school focuses on character development, and that’s powerful because we want our kids to not just be smart but to be great people.â€

Greatness? That may sound lofty and idealistic, but hearing Pierre-Floyd say it, it comes across as reasonable and, in a sense, inevitable. Kids who come from high-poverty communities where there is a decided lack of zest may need to aim really high. Being “smartâ€ or having a degree isn’t enough of a goal. Exerting this much effort the goal has to be worth it. Maybe for the teachers as well.