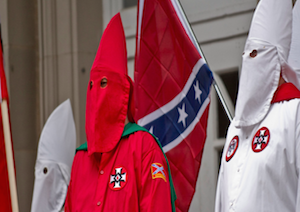 A number of flyers promoting the Ku Klux Klan were found in Los Angeles’s Huntington Beach one week before a planned “White Lives Matter” rally is set to take place.

The KKK flyers were found on Easter Sunday, KTLA reports. Huntington Beach Police were tipped off about the racist propaganda that read “White lives do matter,” along with an image of a hooded figure and a burning cross, as captured by the Orange County Register.

A journalist shared a close-up of the KKK flyer on Twitter while correlating the ad’s connection to the 2016 KKK rally in Anaheim that turned violent. “A little more on the KKK flyers distributed in downtown Huntington Beach this morning (redacted, I’m not sharing their phone or website),” they wrote. “They’re similar to what was used in North Carolina in 2016, same year Will Quigg showed up in Anaheim.”

A little more on the KKK flyers distributed in downtown Huntington Beach this morning (redacted, I'm not sharing their phone or website). They're similar to what was used in North Carolina in 2016, same year Will Quigg showed up in Anaheim. https://t.co/3OBXxHshpd pic.twitter.com/mTZ0QS0rko

Huntington Beach Mayor Kim Carr revealed the “countless emails expressing anger over these fliers and rallies,” that she received in recent weeks.

“The KKK fliers are a cowardly attempt to drum up support for a hateful cause that is in contradiction to Huntington Beach’s values of integrity, respect and inclusivity,” the mayor said in a statement. “We have zero tolerance for racism in our City, and while we absolutely support the First Amendment, we stand strongly against hiding behind it to promote hate.”