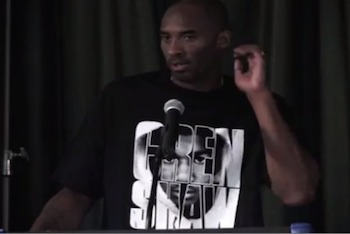 Described officially as an anti-gun violence and racial profiling rally, the event took place on the one-year anniversary of the controversial George Zimmerman verdict. A large group of about 200 – including Kobe Bryant and Nipsey Hussle – gathered to show united support for peace and justice.

The Zimmerman verdict still reverberates throughout African American and Latino communities, as protesters believe the fight against injustice must continue. Martin’s parents led all whom came and informed anyone within earshot why they were attending the gathering. “It’s about being loyal to you guys because you have been so loyal to us,” Tracy Martin said. “We want Los Angeles to know we stand with you. We understand, we support you,” Sybrina Fulton, Trayvon’s mother, added.

Others in the crowd carried posters, mementos, and pictures of loved ones who were unceremoniously killed in senseless acts of violence. All came with the intention of speaking out against racial profiling and gun violence. Los Angeles Lakers superstar Kobe Bryant received a standing ovation from the protesters in attendance. “When you look at Sybrina and Tracy, what they had to go through as a family and what they’ve come out of – that is true adversity,” Bryant said.

A few months ago, his comments stoked an ire in the Twittersphere, as people slammed the five-time NBA champion for comments he made in the New Yorker. Donning a shirt featuring Trayvon Martin’s face on it, Bryant said that it is “our responsibility” to help people out. “Our responsibility is more than putting a ball in a basket,” he said, “but giving them the platform to voice these inspirations.”

Watch Kobe speak in the video below: