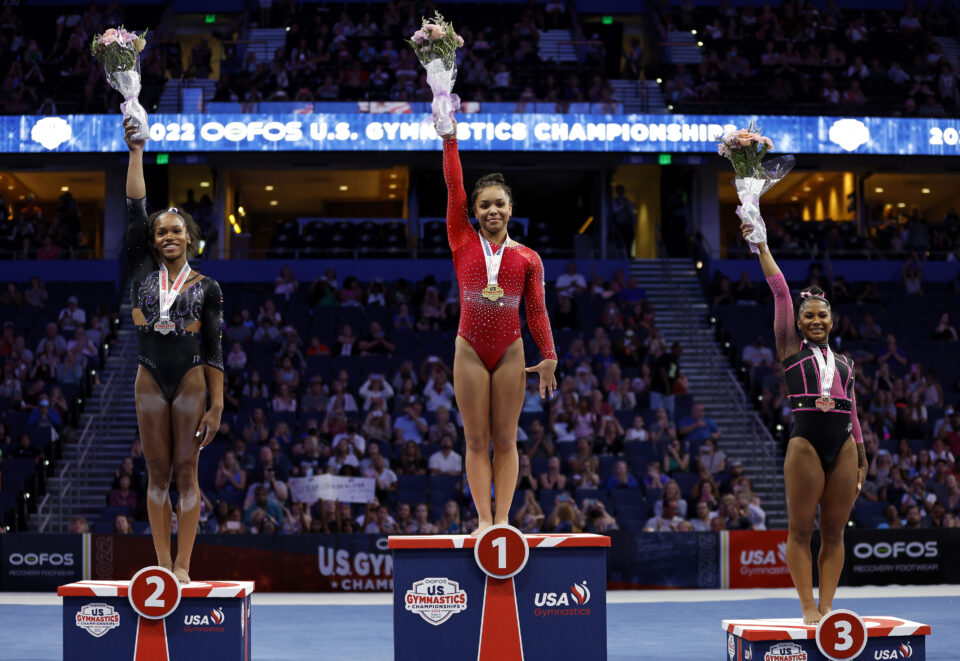 TAMPA, FLORIDA - AUGUST 21: Shilese Jones, Konnor McClain, and Jordan Chiles celebrate winning the all around competition during the 2022 US Gymnastics Championships at Amalie Arena on August 21, 2022 in Tampa, Florida. (Photo by Mike Ehrmann/Getty Images)

Black women are reigning in the powerful sport of gymnastics, especially regarding the winner’s podium at the 2022 U.S. Gymnastics Championships this past Sunday.

According to NBC Sports, 17-year-old Konnor McClain earned the U.S. all-around title and a gold medal to shine around her neck at the national championships. Her triumphant win is a comeback after recovering from a stress fracture in both shins, a concussion, and the flu just two weeks ago.

By Sunday’s final day, McClain had been behind Jones by eight tenths. It wasn’t until Jones fell on her uneven bars routine during the last rotation, which resulted in a one-point deduction, that McClain claimed the first spot.

McClain’s “combined eight-rotation 112.750 beat out all competition for the night’s biggest prize, and she added balance beam gold (28.900) along the way,” as reported by USA Gymnastics. Jones finished a close second with 112.000, while Chiles finished third with 111.900.

The feat had followed after a grueling journey even outside the gym. The winning teenager lost her father and grandmother over a week earlier this year and struggled with health issues even after securing the Winter Cup in late February, according to ESPN.

McClain has set her sights on the 2024 Olympic all-around title since she was 11 years old. Not without a challenge or injury, this star has captured the 2022 title having to compete at 75%.

“Anything can happen,” McClain said as she looks forward to the world championships in Liverpool, England, this fall.. “So I’m excited for the future.”