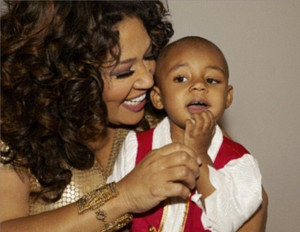 According to The U.S. Center for Disease Control and Prevention, three million American children have a food allergy and that number looks to climb. As children are exposed to public environments, the likelihood that they’ll be exposed or fed something they’re allergic to increases dramatically, especially if they’re not in the care of their parents.

“Luckily, I was home,” she told ABC News. “I heard that cough that sounded like what he had before he was tested.”

To avoid this near tragedy from ever happening again, Whitley designed a t-shirt where parents can list any allergies a child has, according to The Huffington Post. The t-shirts are bright red with “DON’T FEEDâ€ in block letters that one can’t miss. Also, on the shirt, are a series of boxes parents can check off for popular allergies like gluten, dairy, soy and peanuts.

Whitley plans to sell the t-shirts for $10 each at Dontfeedme.org

Kym Whitley, who has appeared in comedies such as Along Came Polly and I Love You, Man, is due to appear in her own reality TV show about being a single mom starting next month. “Raising Whitley” on the Oprah Winfrey Network will follow the single mother in her day-to-day life in Los Angeles.