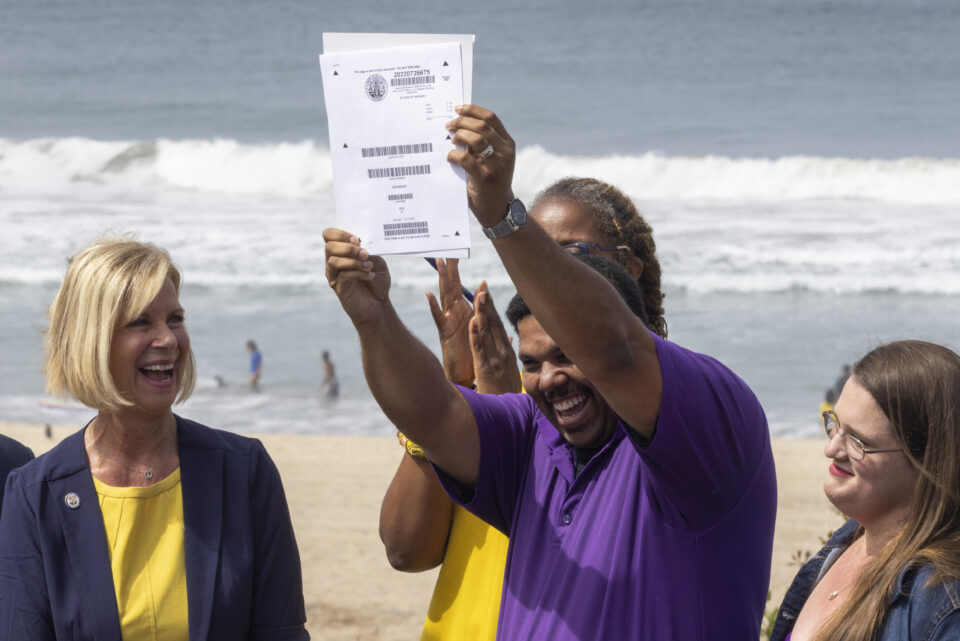 MANHATTAN BEACH, CA - JULY 20: Anthony Bruce holds the official Bruce's Beach property deed after receiving it at a ceremony to return ownership of Bruce's Beach to the descendants of a Black family who had the land stripped from them nearly a century ago on July 20, 2022 in Manhattan Beach, California. In 1912 and 1920, Willa Bruce, who was Black, purchased two lots of land along this strand and soon, Charles and Willa Bruce turned the property into a seaside resort welcoming Black beachgoers from across the region. Six other Black families also purchased lots and built homes. The site became colloquially named Bruce's Beach. Increasing popularity of the resort alarmed locals who reacted with fear and racism. Nearby white real estate agents submitted a petition to the Manhattan Beach City Council in 1924 which prompted the city to seize Bruce's Beach through eminent domain and turn it into a park. (Photo by David McNew/Getty Images)

The heirs of Charles and Willa Bruce have officially secured ownership of Bruce’s Beach, a successful resort that was stripped from the Black couple nearly 100 years ago.

According to KABC TV, the Los Angeles County presented the deed of the oceanfront property to its rightful owners during a ceremony on Wednesday.

“It is my honor to be here and present a certified copy to the family,” said L.A. County registrar-recorder and county clerk Dean Logan at the highly anticipated event, per the news outlet.

The descendants of the Bruce family have awaited justice in addressing the discrimination endured by Charles and Willa, entrepreneurs whose resort was one of the few places where Black families could enjoy the lush amenities of a lodge, cafe, and dance hall.

BLACK ENTERPRISE previously reported on the city of Los Angeles’ agreement to pay reparations and return ownership of the beachfront property located on the shore of the now-upscale Manhattan beach.

The move sheds light on the story behind Willa and Charles Bruce’s purchase of the land in 1912. While facing racial discrimination and harassment, the couple had their property seized through eminent domain by city officials in 1924.

It was L.A. County Supervisor Janice Hahn who launched the process of returning the property to the descendants of the Bruces in April 2021.

“Today, we are sending a message to every government in this nation confronted with this same challenge. This work is no longer unprecedented,” Hahn said, per KABC.

In the agreement, the county will lease a lifeguard station on the property from the Bruce family for about $400,000 a year. Additionally, Bruces are allowed sell the property to the county for $20 million at a later time.

Members of the Bruce family echoed their gratitude.

“Thank you so much,” said Anthony Bruce, a great-great grandson of the Bruce couple. “Without God, we would not be here today. And finally, most importantly, thank you all. God bless.”

“My family declared that this was sacred land, and I was going to do everything I could to get it back,” said Chief Duane “Yellowfeather” Shepard, another member of the Bruce family at Wednesday’s ceremony, according the news outlet.