L.A. Reidâ€™s 4 Tips for Being a Successful Executive in Music Business 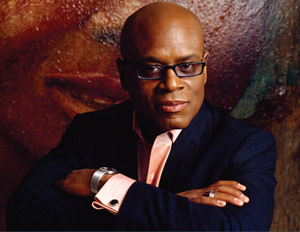 It took one phone call to get Antonio “L.A.â€ Reid on board as a judge for The X Factor. “I always liked the idea of music platforms to discover and identify talent,â€ says the longtime music executive. “In the music industry, we have often struggled with those platforms. Simon [Cowell] talked to me about it, and I loved the idea and signed on.â€

The 55-year-old, who, in July, was officially named chairman and CEO of Epic Records, says The X Factor, which premieres Wednesday night on Fox, is not a retread of American Idol and The Voice. “What really separates it are the people,â€ says Reid. “So many shows have a similar format.â€ Jay Leno’s format is not so different from David Letterman’s, he points out. “The format is a talk show. The difference is the personalities on those shows.â€

Whether you want to be a recording artist or a music executive, or if you’re a music lover, here are some things Reid wants viewers to keep in mind while watching:

There is no “x-factorâ€ when L.A. Reid is considering an artist.

“I think when you go into it looking for something, I think that in many ways that may resemble copying. Cookie cutter, and I don’t really do it that way,â€ Reid says. Voice, presence, personality and songwriting could come into play, but there is not specific piece. “When I met OutKast, as an example, I wasn’t looking for anything, and they blew me away.â€

Immerse yourself in music.

Reid began his career as a drummer more than 25 years ago, but he had the executive suite in mind early. He notes that there are opportunities in music outside the studio, such as lawyers, marketing executives, and finance executives. But to be a music-specific executive, he says, one must learn music, work around music, work in a recording studio, or be a DJ.

“While what we sell and what your passion may be is music, the executives have to have a great general education and a great general knowledge of the industry,â€ says Reid. Although he didn’t attend college, he went through the Advanced Management Program at Harvard Business School, even though he already ran LaFace Records. The program required him to devote 60 to 70 hours a week to his studies, so during that time, he stopped running his business. “It really prepared me to speak the language of corporate America,â€ he says.

Character is key in the professional world.

If you’re a liar, cheater, or stealer, you won’t advance, says Reid. You will get ahead, however, “if you have great character, you have integrity, and you have great commitment. Honesty rules.â€

Find out why Reid’s next move might be biopics in the October 2011 issue of Black Enterprise.