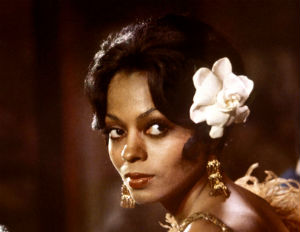 From The Grio and The Root

It’s the 40th anniversary of ‘Lady Sings the Blues,’ the classic film in which Diana Ross starred as Billie Holiday, the troubled jazz legend. Â But Adam Howard at theGrio says that the film was a huge gamble and almost didn’t get made.

Ross had just exited the iconic Supremes girl group and had begun her solo career in earnest. But her mentor (and on-and-off lover) Gordy had aspirations of making his label’s biggest act a movie star.

Paramount Pictures got behind the project, which was loosely based on Billie Holiday’s 1956 autobiography. But many critics and fans of the late jazz legend decried the casting of Ross – who didn’t resemble Holiday physically or vocally.

“My first reaction when I learned thatÂ Diana Ross had been cast to play Billie Holiday was a quick and simple one: I didn’t think she could do it,â€ wrote Roger Ebert in his 1972 review of the film.

Conscious of the iconic shoes she was filling, Ross imbued the role with her own spirit and opted for a vocal homage to Holiday instead of outright mimicry.

Over at the Root, Genetta M. Adams recasts the movie for contemporary audiences, with Mary J. Blige replacing Diana Ross in the titular role. “Who better to play Holiday than Blige, who’s known for channeling the pain and anguish of her life into her music, much like the blues singer herself [?]”

Read the full story at The Grio.