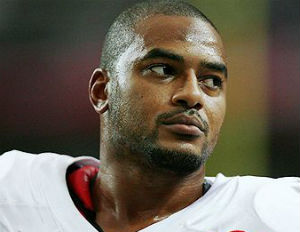 Former NFL player Larry Johnson can’t seem to get out of trouble with women.

The former star running-back was arrested in Las Vegas, Nevada after cops collared him for choking his ex-girlfriend unconscious.

The incident occurred at the Bellagio Hotel. He is due back in court October 11.